Pirelli has nominated the P Zero Yellow soft and P Zero Red supersoft tyres for use in F2, with the soft compound to be made available for GP3. On Sunday night, at the gala awards night for both championships, Pirelli will be presenting prizes to the top GP3 driver, as well as the best rookie in Formula 2 – as voted for by an international panel of journalists.

The challenge for the tyres:

The Yas Marina circuit features three distinct sectors. Sector one is made up of the fastest and longest corners which place high lateral forces on the tyres. The middle sector consists mostly of two long straights, while the final third of the lap is characterised by slower, twisting corners.

With a smooth track surface, wear is fairly low, but good traction is crucial to carrying speed onto the long straights and out of the slow corners. Drivers need to avoid wheelspin in order to preserve the rear tyres.

Setup is a compromise, but medium downforce is favoured in order to ensure good speed down the straights. This places the emphasis on mechanical grip from the tyres for carrying speed around the circuit’s 21 corners.

Mario Isola: “Just as in Formula 1, Abu Dhabi provides a spectacular finale to another great season in both Formula 2 and GP3. The Yas Marina circuit provides an all-round challenge for the drivers and also the tyres, with a combination of high-speed short straights and more technical sections. Unlike Formula 1, the races in Formula 2 and GP3 will take place in the day, with high track temperatures. These varied demands mean drivers will need to consider how best to use their tyres during the course of a race: an important skill for them to learn on the way to F1.”

The race and the rules: Formula 2 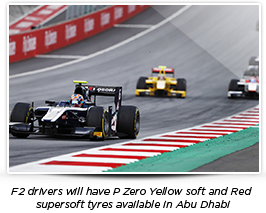 The drivers can use their tyre allocation in any way they like, but at least one set of each compound must be used in the feature race (unless it is a wet race). One set of the harder compound must be returned after free practice.

Qualifying takes place at 19:00 on Friday, after practice at 11:30. The feature race on Saturday at 18:40 lasts 31 laps and each driver must complete one compulsory pit stop. This cannot take place within the first six laps. Unlike Formula 1, the drivers do not have to start the race using the tyres they qualified on.

The grid for the sprint race on Sunday at 14:10 is determined by the finishing order of the first race, with the top eight positions reversed. It is run over 22 laps, with no compulsory pit stops. 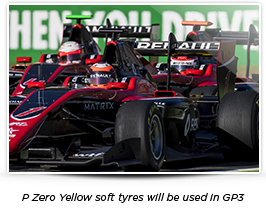 Every car will have three sets of dry tyres and two sets of wet weather tyres available for the GP3 race weekend. Only one compound is nominated: soft for Abu Dhabi. The drivers can use the tyre allocation in any way they like.

Drivers are also allowed to carry over one additional tyre set from the previous round for use in free practice only, but this will not be the case in Abu Dhabi, for logistical reasons. As a result, the GP3 teams will have four new sets of soft tyres at the start of the weekend.

Qualifying takes place at 15:10 on Saturday after a single free practice session on Friday at 10:15. Race 1 starts at 12:20 on Saturday and lasts for 18 laps, followed by Race Two at 18:40 on Sunday (lasting 31 laps). The grid for Race 2 is determined by the finishing order of the first race, with the top eight positions reversed.