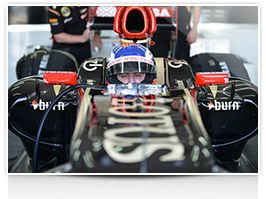 Swiss driver Fabio Leimer, the winner of the GP2 Series last year, tested a 2012 Lotus F1 Team car as part of his prize for winning the championship from Pirelli. The 25-year-old completed 78 laps and around 300 kilometres of the Paul Ricard circuit in the south of France, run in 3.8-kilometre configuration and using part of the famous Mistral straight. Leimer was using Pirelli’s demo tyres, as required by the current Formula One regulations, and a two-year-old car. Demo tyres, which carry the same coloured markings as the actual Formula One tyres, are not as technologically advanced as the tyres used at grands prix, but still come in different compounds and are not far off the pace. It was the first time that Leimer had driven a Formula One car since he tested a Sauber in the 2011 Young Driver test at Abu Dhabi, again on Pirelli tyres. In contrast to the heat of the Middle East, conditions at Paul Ricard were a temperate 18 degrees centigrade ambient and 26 degrees on track in the morning, with some wind. In the afternoon, track temperature increased to 32 degrees centigrade. “It was an absolutely fantastic experience and I really enjoyed myself,” said Leimer. “In the morning we had a bit of understeer due to the conditions, but during the long runs in the afternoon I developed a really good feeling with the car and tyres; the medium tyre in particular was very consistent. It was a great opportunity and I could certainly see the difference in the various compounds I tested. I’d like to thank Pirelli for this chance that will definitely help me in future. Now I’m just looking forward to driving a Formula One car again!” 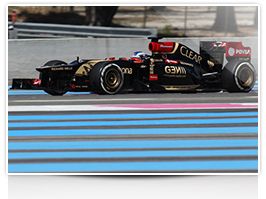 Leimer completed a tyre test simulation, starting off with a baseline run on the medium demo tyre then comparing it to the soft and hard demo tyres using the same set-up, so that the tyres were the only variable. This is the same process that Pirelli’s test drivers go through when evaluating prototype tyres. In total, he used seven sets of Pirelli’s demo rubber across all three compounds available, completing 42 laps in the morning on shorter runs and 36 laps in the afternoon on two long runs. Pirelli’s racing manager Mario Isola commented: “Fabio was impressive both in terms of his pace and his feedback. While our demo tyres are not quite the same as the real Formula One tyres, they are still enough to give a good idea of what it is like to drive at the very top level. We were delighted to offer him this opportunity and the chance to prove once more that graduates from the GP2 Series – especially the champion – are more than ready to face the demands of Formula One.”