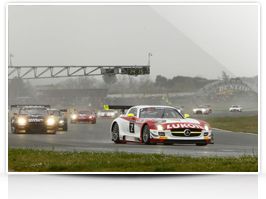 The second round of the FIA GT Series gets underway at Zolder this weekend where Italian tyre firm Pirelli will once again be on-event to supply its P Zero slicks and P Zero wets to the crews competing on the famous Belgian circuit. Pirelli has a strong track record of supplying rubber to manufacturers competing in the top echelons of endurance racing and this year’s championship will benefit from new tyre sizes for rear and mid-engined cars, as well as the latest production processes derived from Pirelli’s role in Formula One. The Italian tyre firm will also supply this year’s supplementary endurance racing series – the Blancpain Endurance Series – which kicked off in Monza last weekend, and helps to emphasise Pirelli’s ongoing commitment to the world of endurance racing. After today’s free practice, this weekend’s race will host qualifying in three knockout sessions, similar to Formula One, together with a qualifying race on Saturday 20 April. The championship race takes place over an hour on Sunday 21 April. Nine-time world rally champion Sebastien Loeb will be joined by a host of other teams hungry for round two victory including Nogaro victors, Belgian Audi Club Team WRT, which will bring a trio of Audi R8 LMS Ultras to the start grid. Zolder will also host the second round of the ‘Pit Stop Challenge’: a new-for-2013 initiative which rewards the team that changes its Pirelli P Zero tyres during the pit stops in the quickest time with a cash prize. Pirelli’s senior tyre engineer Matteo Braga said: “This year marks the 50th anniversary of the legendary Zolder circuit and after the excitement of the opening round in Nogaro in France, we’re looking forward to doing it all over again in Belgium this weekend. Zolder is a narrow, technical circuit and the teams may have to think carefully about tyre management in order to make the most of the limited opportunities they will have to overtake. Just like Spa, the weather can be variable and ambient temperatures are sometimes quite low. It’s going to be important for the tyres to offer a good warm-up and deliver consistent performance over a wide range of speeds, conditions, car types and driving styles. This is why the FIA GT Series is one of the biggest challenges a tyre company can face in motorsport, and why it is so relevant to our road products.” Zolder, which is 4.011 kilometres long with 10 corners, has hosted all types of motorsport in the past, including the Belgian Grand Prix on 10 separate occasions in the 1970s and 1980s. Rain is a frequent feature of the event, so Pirelli will bring its wet tyres as well, which are yet to be used throughout this GT season.

For more information and photographs, please contact Anthony Peacock on +44 7765 896930 or anthony@mediaticaworld.com