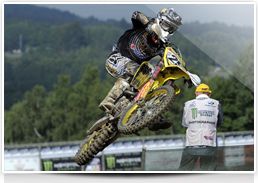 Pirelli came through the Grand Prix of Czech Republic with flying colours by owning the MX1 and MX2 categories for the twelfth round of the series on the slippery hard-pack of the Loket circuit. The Scorpion MX monopolised the MX2 podium with class leader Ken Roczen earning his third double moto haul of the season over team-mate Jeffrey Herlings and stretching a lead of 27 points from the Dutchman in the standings. Third and fourth places belonged to Kawasaki CLS duo Tommy Searle and Max Anstie respectively while Yamaha’s Gautier Paulin reached 5th spot in the second moto but failed to finish the first race due to a technical problem. MX1 belonged to factory Suzuki rider Clement Desalle who finished ahead of Antonio Cairoli by using his determination and precision, not to mention effectiveness from the start gate, to beat his rival by taking 2nd and 1st positions in the moto.

The World Champion claimed the first race and then completed a decent comeback from tenth to fourth in the second outing. With three rounds still to run (the next meeting will take place in England on August 21st) the works KTM man is 48 points ahead of the Belgian and 81 in front of Yamaha’s Steve Frossard. The Frenchman left Loket with 5th place in the first moto and 12th in the second after a first lap crash. David Philippaerts and Steve Ramon were both absent. The former due to a training crash several days before the Czech meeting while the latter sustained a back injury in Belgium the previous weekend. A fractured shoulder picked up two weeks ago affected the performance of Simone Zecchina and the Italian could only finish 3rd overall and has slipped from 1st to 2nd place in the European 125cc two-stroke championship. “On Saturday we tried the Scorpion Mid Hard 454 and the MidSoft 32,” said Pirelli Racing Service Manager Giovanni Gatti. “The combination of the rain and loose soil sections led us to opt for the Midsoft and it met all our expectations in terms of results through the classes.”