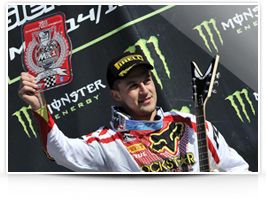 The Pirelli Scorpion MX was able to taste success at the Grand Prix of United States, the first of two flyaway trips of the 2011 season. Across the fast and scenic Californian circuit of Glen Helen on the eastern outskirts of Los Angeles works Suzuki rider Clement Desalle scaled the top of the MX1 podium thanks to victory in both motos and now has control of the series. The Belgian beat KTM’s Max Nagl and Russian Evgeny Bobryshev. Fourth overall on the day went to Antonio Cairoli who could do not better after a collision with another rider in the second moto. The champion is now third in the standings and 24 points away from Desalle. It wasn’t a good day for Steve Frossard, who crashed in both motos and could not finish the second, meaning that he surrenders the MX1 red-plate. The MX2 podium was a Pirelli clean sweep, and again the top two positions were taken by KTM. At the peak of the event standings was Ken Roczen. The German beat team-mate Jeffrey Herlings on both occasions and also headed Kawasaki rider Tommy Searle onto the podium. Pirelli filled the following four positions in the U.S. GP listing thanks to Max Anstie, Zach Osborne, Harry Kullas and Christophe Charlier. “The soft and sandy stretches of this track highlight the potential of the MidSoft 32 that was used by all of our riders,” said Giovanni Gatti, head of Pirelli’s racing service “except for those who chose the 120/80-19 spec measurement, the Kawasaki Pro Circuit riders of Searle and Anstie, who were able to find good traction and maximise their engine power.” The Scorpion MX’s rout was completed by Mats Nilsson in the Veteran’s category. The Swede’s rubber allowed him to consolidate his position at the top of the championship. Round four of the series will take place next weekend at Indaiatuba in Brazil. 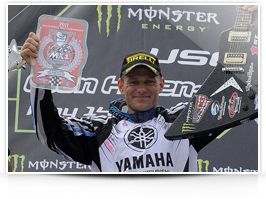