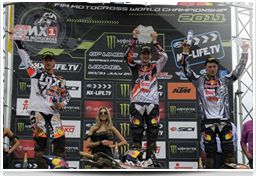 The eleventh round of the FIM Motocross World Championship took place on the feared sand of Lommel; dreaded because of the large bumps and holes of the physically demanding terrain. However the Belgian setting was another positive stage for Pirelli. The Scorpion MX has been stacking up yet more victories with success in MX1, MX2 and also the MX2 European Championship. The model was only denied in the Veteran’s World Cup after champion and leader, Sweden’s Mats Nilsson, was unfortunately ruled out of the Grand Prix of Limburg with a broken wrist. The premier class witnessed the second victory in a row and the second in two years at Lommel for Antonio Cairoli, who was clearly the fastest rider on the sand despite a couple of crashes. Behind him was home rider Clement Desalle and German KTM team-mate Max Nagl, while works Yamaha rider Steve Frossard was fifth overall to consolidate third place in the world championship standings behind Cairoli and Desalle.

MX2 was dominated by the factory KTMs with Scorpion MX as sand-master Jeffrey Herlings benefitted from a last lap mistake in the first moto by team-mate Ken Roczen to go 1-1 and take his second success this season in the sand. Third on the podium was Belgian Jeremy Van Horebeek who led home other Pirelli riders Max Anstie, Gautier Paulin, Tommy Searle and Harri Kullas.

The latest instalment of the European series was won by Dutchman DonnyBastemeijer with second place belonging to Michael Van Wezel. Pirelli Racing Service Manager Giovanni Gatti was immensely satisfied with the Flemish outing. “The black sand of Limburg highlighted the excellent capabilities of the MidSoft 32 front and Soft 410 rear,” he said. “Which in addition to being used by Pirelli riders was taken by the first seven classified in MX2 and first three in MX1, not forgetting the first two of the European MX2.” Round twelve of fifteen will take place on August 7th at Loket in the Czech Republic. MX1 Overall Classification