First stone laid in the district of Subang, Indonesia 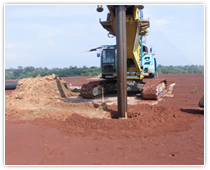 Building of the new motorcycle tyre facility in Indonesia got underway with the laying of the first stone.  Attending the ceremony in the city of Wanakerta, district of Subang, West Java were: Paolo Benea, head of the joint venture between Astra Otoparts and Pirelli for motorcycle tyre production in Indonesia (Evoty - PT Evoluzione Tyres); Pak Rachmat, head of Subang district, and Pak Ramli, head of Wanakerta. For Evoty, in addition to Paolo Benea, Paulo Marks, industrial director, and Tonny Santoso, Vice President Director also attended. All strictly dressed in batik shirts, clothing considered de rigueur in Indonesia for official celebrations. Production at the new motorcycle tyre plant in Asia will begin at the end of 2014.   Initial output will be 2 million tyres per annum, increasing to 7 million units when fully operational. 40% of these motorcycle tyres are bound for the domestic market and the rest for export. They will be distributed by the Astra Otoparts network, Indonesia’s leading reseller of quality automotive spares and accessories for both OEM and aftermarket.

First stone laid in the district of Subang, Indonesia