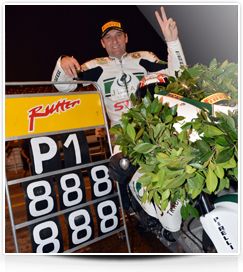 Michael Rutter scored an unprecedented eighth Macau Grand Prix victory to firmly secure his place in the record books and take a fifth consecutive win for Pirelli around the unique 3.8 mile, armco lined Far East street circuit. Using the latest generation Pirelli Diablo Superbike slick tyres from the company’s ‘road race’ programme, Rutter opted for a harder rear compound for his SMT Honda Fireblade which lasted strongly throughout this unique race at the former Portuguese colony. Runner-up Martin Jessopp (Riders Ducati) chose the softer option rear to record a fastest lap and dominant Pirelli result at this final International event of the year. During practice, incidents in the Formula 3 and World Touring Cars forced qualifying to be cut in half, as Rutter put in an early 2:27.566 lap to go to the top of the table, before securing pole position with a 2:27.545. Fellow Pirelli riders Martin Jessopp, Gary Johnson and Conor Cummins qualified third, fourth and fifth respectively. With the race having to be delayed by 24 hours due to inclement weather, the riders finally lined up just before 5pm local time on Sunday. Johnson took the holeshot but Rutter wasted no time in getting to the front and took the lead early in the opening lap, where he then set about pulling a 1.6s lead by the end of Lap two. Rutter continued to extend his lead over Jessopp who had fought his way to second after having been back in sixth at one point. By half race distance Rutter had a 3.6s lead and despite Jessopp chasing hard and pulling a second back with a 2:27.249s lap, Rutter was able to remain calm to claim his record-breaking eighth Macau victory by 4.9s and lead a Pirelli 1-2 over the line. Michael Rutter said, “To get my eighth win here is just incredible, I love this event. It was a tough race and Martin kept me on my toes but the Pirelli tyres continued to give great grip throughout the race, allowing me to keep pushing to the very end.” Pirelli UK Racing Manager Jason Griffiths said, “What a fantastic result! Five wins from five starts at the Macau GP for Pirelli. Michael made a great start and controlled the race throughout. He ran the same road race spec rear Diablo Superbike as last year, confident with its consistent performance and knowing durability would not be an issue and Martin took a deserved second with a slightly softer option. Our thanks go to the SMT Honda and Riders Ducati teams for their commitment to Pirelli.”