For the first European round of the WorldSBK Championship, Pirelli relies exclusively on larger size solutions for the premier class

At Motorland Aragón, the Italian tyre company continues to develop the larger 125/70 front and 200/65 rear size solutions, while for the first time the WorldSSP300 class riders, on their seasonal debut, will use the standard SC1 at the rear

For the first European round of the MOTUL FIM Superbike World Championship that will take place next weekend in Spain, at the MotorLand Aragón circuit, Pirelli has decided to rely exclusively on the new larger size solutions for the premier class.

This is in line with Pirelli’s announcement at the end of last season: the main objective in terms of development for 2019 is to complete the range of solutions in the larger 125/70 front and 200/65 rear sizes, which are already present on the market but in the SC1 front and SC0 rear compounds only.For the first European round Pirelli has therefore developed a new front tyre in 125/70 size and SC2 compound and two new rear tyres in 200/65 size and SC0 and SC1 compounds.

A further novelty, on the tyre side,concerns the WorldSSP300 class, which at Aragón will face their first round of the season. This year the young riders of the 300 series, which until last year used DIABLO™ Supercorsa tyres in the SC2 compound for the rear, will have the softest and most efficient SC1 available, which will allow them to take even better advantage of the features offered by their bikes.

The Spanish MotorLand Aragón circuit has historically rather aggressive asphalt, especially harsh towards the rear tyres. In fact, the surface has a rather pronounced roughness which, together with the temperatures that are not too high in April, could cause tyre wear problems. In addition, the sand that is sometimes carried by the wind and deposited on the asphalt can cause loss of grip and drifts towards the centre of the curve. This explains why, for the rear, Pirelli has opted for both soft and medium solutions, the latter being useful especially in the event of low temperatures and in the first sessions if the surface is particularly dirty.The front tyres, in addition to the wear caused by the aggressiveness of the asphalt, are also called to withstand violent braking at the end of the straight opposite the pits and the steep slopes, which cause high loading on the front end. Also, the fast curves and multiple changes of direction, where a good level of precision and grip on the surface is required. For that reason, the riders of the WorldSBK class at the front will have two solutions in the SC2 medium compound which historically offer greater stability than the SC1.

The solutions for the WorldSBK and WorldSSP classes:

In the WorldSBK class, as already written, the riders will have at their disposal only tyres in larger 125/70 front and 200/65 rear sizes.
There are three front options, two of which are already used in the first two rounds and one completely new solution. The options already known and used are the standard SC1 125/70 in soft compound and the development SC2 X1071, also in 125/70 size but in medium compound, which should offer a level of grip similar to the standard SC1 but greater stability and wear resistance. The novelty is represented by the development SC2 X1118 which, compared to the X1071, should be more rigid and more stable so it could be chosen by riders who have a more aggressive riding style.
As for the rear options, the already known standard SC0 in 200/65 size is flanked by two development solutions in the same size but in different compounds. The development SC0 X0914 has already been used by riders last year in the Magny-Cours round and, compared to the standard SC0, it offers a more solid structure that helps ensure greater stability and more thrust. The development SC1 Y0187 represents instead the first solution in a larger 200/65 size to be developed in a medium compound. This latter option could be the ideal solution for the first weekend sessions when the asphalt is more dirty and aggressive, rather than for the first hours of the day when temperatures could be lower.
In addition to these solutions, at the rear the riders will also be able to use a new SCX tyre in super soft compound in the new Y0309 specification which can be used during the qualifying session in preparation for the use of the only Superpole® tyre available to the riders, and possibly for the Tissot Superpole Race if the circuit allows it.
The last rear option is the Superpole® tyre that will allow riders to make a lap during the Superpole® in search of the absolute best time to position themselves on the starting grid.

In the WorldSSP600 category, there will be four dry solutions available to riders, two front and two rear ones. For the front, there will be the standard SC1, already present in the first two rounds, and the development SC2 X0582 which compared to the standard SC2 offers greater grip and lower wear. At the rear two development solutions, one in soft compound and one in medium compound. The development SC0 X0497 compared to the standard solution should offer better resistance and constant performance, while the development SC1 X0093 has been designed to offer a high level of performance and low wear and could be the race solution in case of low temperatures.

As always, in case of bad weather, riders of all classes will have rain and intermediate tyres available. 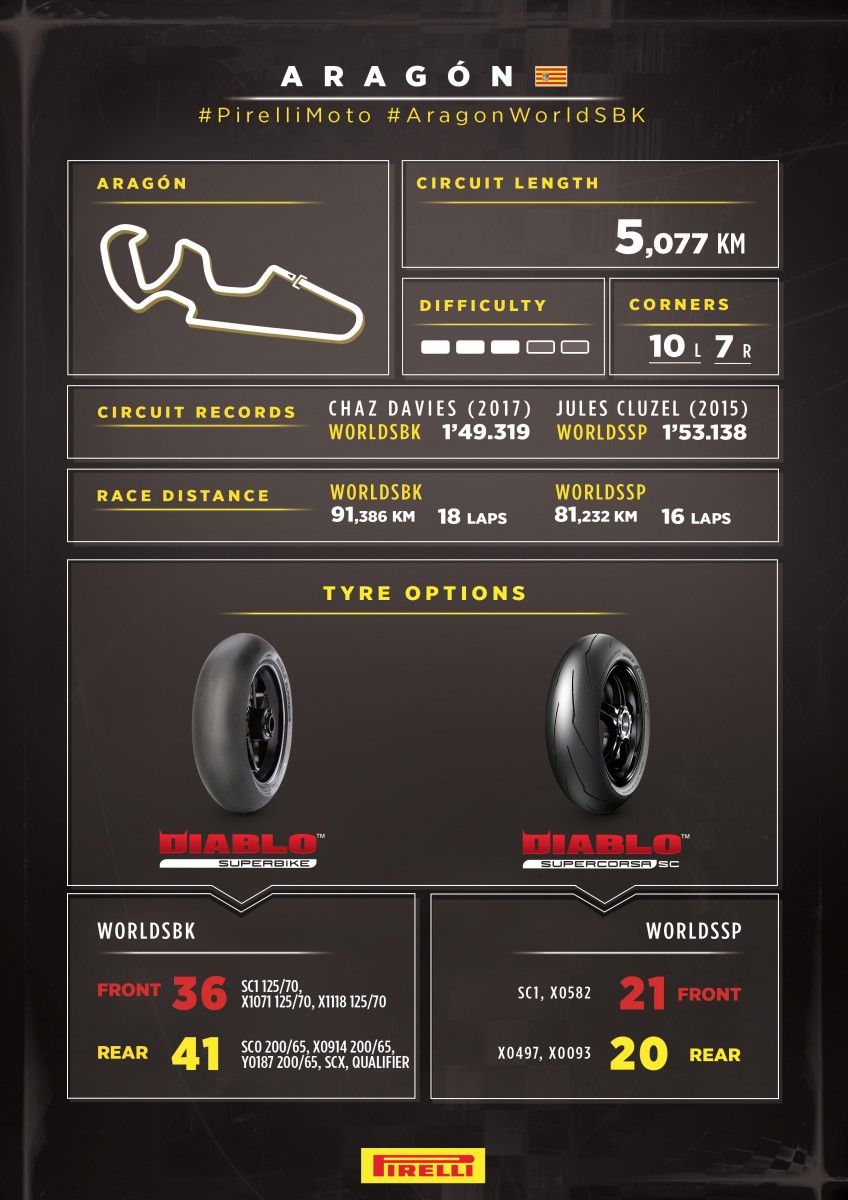 More details on the race solutions for WorldSBK and WorldSSP600 classes are available in the technical sheets attached to this press release.

The 2018 Pirelli statistics for Buriram

• Number of solutions (including dry, intermediate and wet) for the Superbike class: 6 front and 6 rear

• Number of tyres available for each Superbike rider: 39 front and 34 rear

• Number of solutions for the Supersport class (including dry, intermediate and wet): 5 front and 4 rear

For the first European round of the WorldSBK Championship, Pirelli relies exclusively on larger size solutions for the premier class
Newsroom