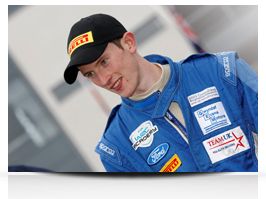 Former Pirelli Star Driver Elfyn Evans claimed a dominant victory on last weekend’s Neste Oil Rally Finland, round three of the Pirelli-backed WRC Academy. Evans’ win marks the Briton’s second consecutive victory in this year’s highly competitive series that uses Italian firm Pirelli as the championship’s official tyre supplier. Rally Finland is renowned for being one of the fastest event on the world rally calendar with its super-quick forest stages that are lined with endless trees, crests and hidden ‘yumps’. This year’s event challenged 11 WRC Academy crews with 17 special stages covering 106 kilometres and Pirelli was once again on hand to supply teams with its highly competitive K4 tyre in 175/70-15 K4 size. Evans, winner of the previous round in Greece, drove a near-perfect rally from start to finish as the 23-year-old Briton racked up eight stage wins at the wheel of his Ford Fiesta R2. His sterling performance has awarded Evans with an 18 championship lead at the season’s half-way point. 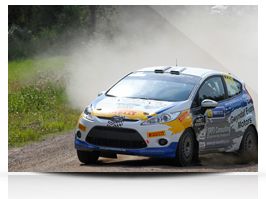 “I’m over the moon to have won in Finland, it’s such an incredible feeling,” said Evans, who also leads his home championship: the Pirelli-supported British Rally Championship. “I had a lot of fun this weekend and we’re learning a lot all the time. The atmosphere and fans that are out on the stages makes this rally even more special. I’ve had a good first half of the season and I’m looking forward to pushing for more victories during the second half.” Pontus Tidemand claimed the second step of the podium following five stage wins on his debut in Finland. The 21-year-old Swede claimed five stage wins today and reached the finish line 55.3 seconds adrift of Evans. Tidemand’s result marks the driver’s second podium finish this season. Former Pirelli Star Driver Brendan Reeves claimed the final podium spot, reaching the finish 32.1 seconds behind second-placed Tidemand. Timo van der Marel was lying third until an incident on the day’s closing Ouninpohja stage saw the disappointed Dutchman forced to retire from the event. Spain’s Jose Suarez finished fourth and was followed closely home by Scotland’s John MacCrone who rounded off the top five. Sixth place was awarded to America’s Chris Duplessis with Jose Silva finishing seventh after a troubled rally. Ashley Haigh-Smith claimed the eighth spot. Fellow Briton Alastair Fisher was battling with Evans for the victory before a throttle problem put him out of winning contention. Fisher was able to return under Rally 2 and finished ninth. The driver now drops to third in the overall standings, three points behind second-placed Brendan Reeves. “Everything started really well and the battle was shaping up nicely with Elfyn [Evans],” said Fisher at the finish. “But then we picked up a puncture on stage five after hitting a rock which caused us problems with the throttle. We couldn’t carry on but we were pleased to come back today. Now we’re going to keep our head down, there’s still three rounds remaining and we’re ready for Germany. We competed there last year so we’ve got some good experience of the stages.” Pirelli’s Motorsport Director Paul Hembery commented: “Finland is renowned in rallying circles as being the fastest and most challenging event on the world calendar. It’s a rally that requires a driver’s utmost concentration at all times as the smallest mistake can easily cause an off-road excursion. It’s definitely a rally that favours the brave and our Pirelli tyres once again showed that they are both durable and reliable this weekend. The K4 tyre is ideally suited to the demanding and exceptionally quick forest tracks in Finland, and the feedback we have received from the WRC Academy crews has been testament to this.” The fourth round of the Pirelli-supported WRC Academy will move to Germany later this month for the first of three consecutive all-asphalt rounds, ADAC Rallye Deutschland (24-26 August). For more information about Pirelli, please contact Anthony Peacock on +44 7765 896 930 or anthony@mediatica.co.uk