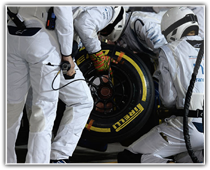 For the 2016 FORMULA 1 season there is the introduction of the new ultrasoft compound and the new rules approved by FIA World Motor Sport Council governing the use of manufacturer Pirelli's tyres. It may seem like a puzzle, but really it is not so hard to figure out the new tyre regulations. Pirelli will now provide three different compounds of dry tyre for teams to use at each race weekend, rather than two. The number of sets provided for each car during a weekend will remain at 13. Pirelli will select two sets to be kept available in the race (one of them to be used), and a set of the softest compound will also be put aside for the final part of qualifying (Q3). Teams will be able to make up their 10 remaining sets from the three compounds available at each race. The choices teams make can be different for each of its cars, so team-mates could have differing numbers of each compound available on a given weekend. As before, drivers must continue to use at least two different compounds during a dry race. Sets will continue to be handed back to Pirelli during a weekend, as was the case before, including the set intended for use in Q3. Drivers that don’t progress to Q3 will be able to carry that set forward to the race. Teams must communicate their compound choices to the FIA in advance of each race and in time to meet a deadline set by Pirelli. Decisions will be kept secret until two weeks before a race. The teams have to inform the FIA of their choices eight weeks before a European race, and 14 weeks before a long-haul race. https://www.youtube.com/watch?v=nNQde0feS0w