Formula 2 gets underway with heat and strategy in Bahrain

Formula 2 started with a brand-new car, new turbocharged engines, and some new drivers in Bahrain. One of those rookies, Lando Norris (Carlin) won the Feature Race, while the action-packed Sprint Race, won by Russian Time’s Artem Markelov, also contained plenty of strategy: even though there are no obligatory tyre changes. 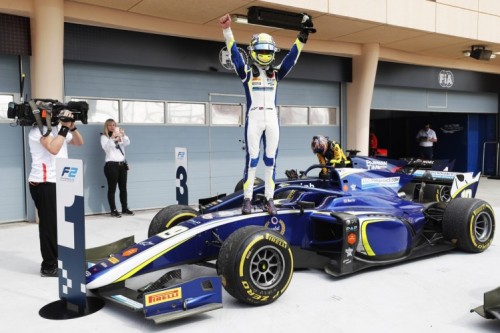 Feature Race, the winner: Norris, a McLaren reserve driver in Formula 1, stamped his authority by winning from pole position. Like most drivers, he chose to start on the medium tyre and then switched to the soft, consistently pulling out an advantage over his pursuers in the early stages. All the stops took place within roughly the same pit stop window during the 32-lap race, between laps 14 and 18. Nonetheless, Norris emerged from his stop on lap 18 without losing the lead, finishing ahead of his team mate Sergio Sette Camara.

Lando Norris: “Formula 2 is about having to manage the tyres; trying to push the right amount and conserve the right amount: getting that balance right. You’re always concentrating, on braking right and not locking up and not wheelspinning or sliding or anything: just every lap you’re concentrating on all those things. You can’t relax, and that’s what makes it so challenging. But it was the perfect result for us.”

Feature Race, alternative strategy: Artem Markelov (Russian Time) was forced into a different approach after his car stalled on the grid and he had to start from the pit lane. He too began on the medium tyre before switching to soft. Incredibly, he worked his way up to third at the flag, thanks to a well-timed pit stop and a fighting drive.The Trident drivers (Santino Ferrucci and Arjun Maini) were the only ones to try an alternative strategy, starting on soft and then switching to medium. This wasn’t a tactic that made a difference though.

Sprint Race, the winner: Last year’s sprint race was sensationally won by Charles Leclerc, now driving for Sauber in Formula 1, by making a pit stop even though it wasn’t compulsory. This lesson was taken on board, with Prema driver Nick de Vries (the same team as Leclerc’s in 2017) being one of the drivers to try it this year, pitting from the lead on lap nine to swap the soft tyre for the medium. Equipped with faster rubber he began to make his way through the field, all the way to fifth at the finish. Race winner Artem Markelov adopted a more conventional strategy, winning on the medium tyres from sixth on the reverse grid without making a pit stop.

Pirelli’s head of car racing Mario Isola: “The Feature Race panned out as we expected, with nearly all the drivers following the medium-soft strategy, although it was interesting to see a few drivers try the ‘Leclerc strategy’ in the Sprint Race, but with not quite the same degree of success as last year. Degradation was generally quite high on Sunday – but actually not on Saturday – with Bahrain now being the venue that has the roughest track surface of the year. There were also some high temperatures during the day but all the drivers managed these challenges well; especially Norris and Markelov.”

The next round of the Formula 2 Championship takes place in Baku, Azerbaijan, from April 27-29.

Formula 2 gets underway with heat and strategy in Bahrain