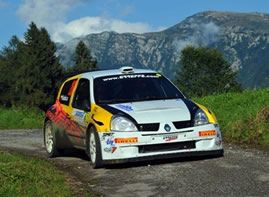 Renault's Robert Kubica has claimed Pirelli's first 'Formula One' victory - more than six months before the Italian tyre firm turns a wheel in the season-opening 2011 Bahrain Grand Prix. Pirelli has recently signed a three-year agreement to supply Formula One, GP2 and GP3 with control tyres, but remains fully committed to rallying at both national and international level. Kubica, who won the 2008 Canadian Grand Prix, is a big rally fan - and he claimed two-wheel drive victory with Pirelli on the Rally d'Alpi Orientali last weekend, a round of the Italian championship, at the wheel of a Renault Clio Super 1600. It was the 25-year-old Pole's first class victory in rallying, achieved over the course of a 14-stage, three-day event featuring more than 167 competitive kilometres. Kubica's car was equipped with Pirelli's PZero asphalt tyres, which proved to be both fast and reliable. "I just came here to have fun really," said the 25-year-old Kubica, who was placed 13th overall. "I have to be careful not to risk too much, as Formula One is my real job. But I love the challenge of adapting to rallying." The Rally d'Alpi Orientali, held in difficult mixed conditions in the northeast of Italy, proved to be an extremely successful weekend for Pirelli. As well as Kubica's Super 1600 and two-wheel drive victory, Pirelli also won the rally overall with Paolo Andreucci in a Peugeot 207 S2000, Group N4 with Andrea Perego in a Mitsubishi, and Group R3 with Pierre Campana in another Renault Clio. Pirelli's motorsport director Paul Hembery commented: "It's great that we've got our Formula One campaign off to such a successful early start by taking this class win with Robert Kubica! The performance of our PZero tyres in difficult conditions enabled a driver who is still finding his feet in rallying to take this very satisfying result and we look forward once again to making our presence felt strongly in both racing and rallying in the future."
Newsroom