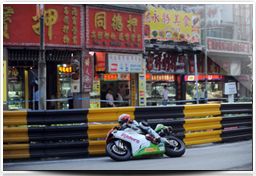 Michael Rutter yesterday won an incredible seventh Macau GP and took a fourth consecutive victory for Pirelli tyres in this prestigious East Asian event. Pirelli had previously won the event three times with Stuart Easton on both Honda and Kawasaki machinery. Rutter won the race from his Riders Ducati teammate Martin Jessopp and secured his name in the record books as the most prolific winner of this unique event, an honour previously held by Ron Haslam. Heavy rain forced the race to be held a day later than planned and was run between the WTCC and Formula 3 races, therefore guaranteeing great exposure for motorcycling and all associated brands in the important Asian market. Michael Rutter said immediately afterwards, “I’m over the moon to get this seventh win and I’ve got to say the tyres were absolutely faultless throughout the race with consistent grip and great stability.” Martin Jessopp added, “The tyres were mint from lap one, no slides and they stayed consistent throughout with great handling stability.” Rutter and Jessopp utilized Pirelli Diablo Superbike (SC2 compound) front slicks from their standard customer range, paired with a rear from Pirelli’s TT and ‘road racing’ development programme. The two riders reigned supreme at the Armco lined circuit made all the more treacherous after the rain and oil from car race incidents. The race was shortened to 10 laps with a track temperature of 30C and ambient of 26C. 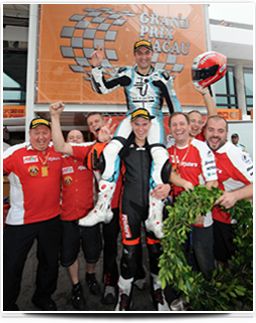 Pirelli UK Racing Manager Jason Griffiths said, “Thanks to Michael, Martin and of course Phil Jessopp and the entire Riders Ducati team. A terrific result and Pirelli are proud to have helped Michael to this very special win. We're extremely pleased by the performance of our Diablo Superbike slicks here. The riders were confident in the performance of the material even with the limited track time they had for set up.” Macau GP results: 1st M. Rutter - PIRELLI 2nd M. Jessopp - PIRELLI 3rd I. Hutchinson 4th J. Toye (USA) 5th G. Johnson – PIRELLI Fastest Lap – M. Rutter 2.25.456