Geneva Motor Show: A red P Zero™ for the Veneno 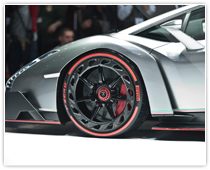 Three unique examples have already been sold for 3 million euro each. Lamborghini chose the 83rd Geneva Motor Show to present its new supercar capable of reaching 100 kph in 2.8 seconds with a top speed of 335 kph. An exclusive vehicle like the new Veneno just had to be fitted with Pirelli bespoke tyres. The exclusive wheels, front 20" and rear 21", are fitted with the P Zero™ supersoft of FORMULA 1 origin featuring a red trim to emphasise its ties with the racing world: indeed, red is Pirelli’s chosen colour for the supersoft option tyres used in the 2013 Formula One™ Championship. The Veneno has been produced to celebrate Lamborghini’s 50th anniversary year and strikes the perfect balance between aerodynamics and stability when cornering. Indeed, the vehicle guarantees the driving experience and feel of a real racing prototype, but is fully approved for road use. Output of the powerful 6.5-litre V12 engine has been raised to 552 kW/750 hp thanks to enlarged intake paths, optimised thermal efficiency, a slightly higher rotation speed and a further reduction in exhaust back pressure. The ISR manual gearbox, permanent four-wheel drive and push-rod suspension have all been specifically tailored to meet the Veneno’s requirements. The monocoque chassis is made entirely from carbon fibre. The tyres for this special supercar 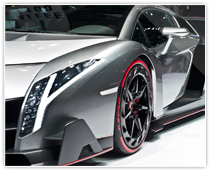 required careful development in order to guarantee a better response to the stress and strain caused by the considerable forces/torque at work. Acceleration performance has been achieved by using tread compounds originating from FORMULA 1. Furthermore, the use of latest-generation Kevlar reinforcements to stiffen the belt keeps deformation under control, enabling the tyre to withstand all forces generated as the wheels turn at high speed. The Veneno’s tyre sizes are 255/30ZR20 and 355/25ZR21.