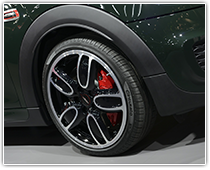 At this year's Geneva Motor Show, Pirelli once again confirms itself as the undisputed leader in terms of  Original Equipment for the top end of the market.  In 2014 alone, Pirelli obtained 266 homologations, of which 213 were in the Premium and Prestige sectors, an increase of 6% compared to the previous year.  Thanks to the latest arrivals, Pirelli’s homologations now add up to a record 1.846 in total globally. The highlights of this year’s 85th Geneva Motor Show include many SUVs, from the Audi Q7 – making its European debut – to the restyled Audi Q3, not to mention the new Volvo XC90, as well as the BMW X5M and X6M. All these vehicles have chosen Pirelli Scorpion (both in the Scorpion Verde and in the All Season version) or P Zero tyres in order to manage their high levels of horsepower. Pirelli designs tailor-made tyres, specifically homologated for each one of these SUVs, ensuring excellent grip and wet braking, combined with the inherent stability needed to get the most out of these kinds of vehicles. Moreover, in Geneva another chapter of the now-legendary collaboration between Lamborghini and Pirelli is on display: the new Lamborghini Aventador LP 750-4 Superveloce, for which Pirelli was chosen as sole tyre supplier. 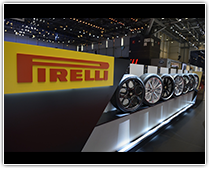 Finally Pirelli also exposes at Geneva the Seal Inside technology, the new technology that allows motorists to continue driving without losing tyre pressure even in case of puncture up to 4 mm.  As well as being seen on original equipment on the new Volkswagens (from the Touran, making its debut in Geneva, to the Passat shown in Paris last year) this technology enhances the premium status of Pirelli’s latest product: the Cinturato All Season, the total mobility tyre, launched into the European market in January. https://youtu.be/UhlI_T5Fmv0