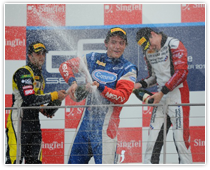 GP2 and GP3 preview: Abu Dhabi 1-3 November 2013 It’s all to play for at the sparkling Yas Marina circuit in Abu Dhabi this weekend as several drivers are in with a mathematical chance of being crowned the new Pirelli-equipped GP2 and GP3 champions. With so few points separating the top drivers, the scene is set for an enthralling season-finale in both grand prix feeder series, which have supplied more than half the current Formula One grid. Yas Marina is a circuit that is characterised by a wide variety of speeds and corners, so to combat these challenges, Pirelli has nominated the P Zero White medium and P Zero Red supersoft compounds for GP2. This is the very first time that this tyre nomination has been used in the 2013 GP2 season. GP3 uses just one compound for the race weekend – which for Abu Dhabi is the medium compound. Pirelli’s racing manager says: Mario Isola: “Abu Dhabi is the final round of the year for our support series and where our new GP2 and GP3 champions will be decided. With only seven points separating championship contenders Fabio Leimer and Sam Bird in GP2, as well as Facu Regalia and Daniil Kyvat in GP3, there’s going to be pressure on the teams to ensure both races are error-free. The drivers will have to ensure they get everything just right: including tyre strategy, which will be of the utmost importance. With the medium and supersoft nomination for GP2, there is likely to be a performance gap of around one second or more between the two compounds, so the crews will need to think carefully about the factors that could come into play and how to plan the strategy over the race weekend as a whole. The GP2 teams have never worked with this particular nomination before, which underlines how we are always willing to introduce new concepts to improve the sporting spectacle. As for GP3, it will be a straightforward race to the finish, with no questions of tactics to add an extra dimension. However, it’s a brand new circuit for GP3, which presents its own challenges. Yas Marina is the ideal circuit to conclude the GP2 and GP3 championships as it incorporates several of the best features of other tracks we have been to this year. The surface is fast and smooth while the track layout tests every aspect of a driver’s skill and a tyre’s capability, which is why Abu Dhabi is often used for testing. On behalf of Pirelli, I’d like to wish all our GP2 and GP3 drivers the best of luck on what will be the most important race weekend of the year.” 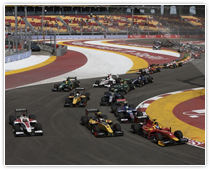 The challenge for the tyres: Abu Dhabi is located at sea level, which means there is a high ambient air pressure at the track. This benefits engine power, which has an effect on the way that the tyres are used. Traction is the key aspect of the circuit, as most of the corners are medium-speed. The Yas Marina circuit requires a compromise in terms of set-up. Low drag is needed to guarantee speed down the long main straight, which is more than one kilometre, but also enough downforce to provide braking stability and aerodynamic grip through the corners. At the start of the weekend the dust on the track surface can cause graining, and there is also a high degree of track evolution. The race and the rules: GP2 Every car will have five sets of dry tyres and three sets of wet weather tyres available for the GP2 race weekend. The five sets of dry tyres comprise three sets of the harder compound (medium) and two sets of the softer compound (supersoft). The drivers can use their tyre allocation in any way they like. One set of the medium compound must be returned after free practice. Race One on Saturday is run over 170 kilometres or one hour and each driver must complete one compulsory pit stop during which a minimum of two tyres must be changed. The grid for Race Two on Sunday is determined by the finishing order of the first race, with the top eight positions reversed. Race Two is run over 120 kilometres or 45 minutes, with no compulsory pit stops. 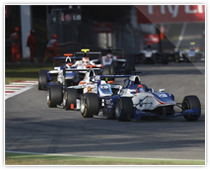 GP3 Every car will have three sets of dry tyres and two sets of wet weather tyres available for the GP3 race weekend. Only one compound is nominated (medium). The drivers can use the tyre allocation in any way they like. All the GP3 compounds carry yellow markings. There is one practice session, one qualifying session and two races in GP3. Qualifying takes place at 1015 on Saturday morning followed by Race One at 1835 (which lasts 14 laps or 30 minutes). Race Two is on Sunday at 1200 (which also lasts 14 laps or 30 minutes). The grid for Race Two is determined by the finishing order of the first race, with the top eight positions reversed. About Yas Marina: Yas Marina is situated on Yas Island, about 30 minutes from the capital of the UAE, Abu Dhabi. Located at the heart of Yas Island, the circuit is 5.554 kilometres in length. The race will be driven anti-clockwise and drivers are challenged with 21 different turns (12 left turns and nine right turns). In 2011, James Calado (ART Grand Prix) and Fabio Leimer (Racing Engineering) were the GP2 winners at Yas Marina. This will be the first time that the GP3 series has held a race in Abu Dhabi. *** Copyright-free videos, photos as well as latest media news are available for editorial use from: www.pirelli.com/f1pressarea (registration required). Follow us on Twitter @Pirelli_Media and @pirellisport or Facebook: Pirelli Motorsport. Please also visit the Pirelli website for more information on the company: www.pirelli.com . For further information please contact: Alexandra Schieren +33 607 03 69 03 alexandra.schieren@pirelli.com Anthony Peacock +44 7765 896 930 anthony@mediaticaworld.com Francescopaolo Tarallo +39 334 684 4307 francescopaolo.tarallo@pirelli.com (Head of Product and Motorsport Communication)