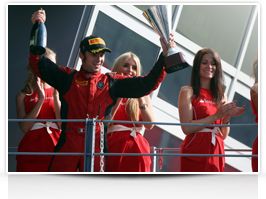 The Italian Grand Prix was the venue for the final round of the GP3 Series and the penultimate round of the GP2 Series, with New Zealander Mitch Evans claiming the GP3 title after a dramatic weekend in both championships. For the fastest race of the year, the GP2 drivers had the P Zero Silver hard and P Zero Yellow soft tyres at their disposal, whereas the GP3 drivers had the P Zero Silver hard tyres available to them. There is generally low tyre degradation at Monza, but certain places such as the famous Parabolica put plenty of energy through the front tyres in particular, and high temperatures throughout the weekend also placed additional stress on the P Zero rubber. Saturday’s 30-lap GP2 feature race was sensationally won by Italian driver Luca Filippi, returning to competition with Coloni after a 12-month absence. Filippi – who tested Pirelli’s next-generation GP2 tyres at Barcelona before travelling to Monza – qualified second on the grid behind Carlin’s Max Chilton. 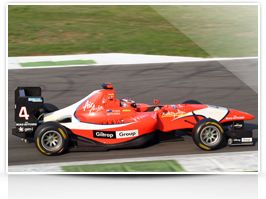 Chilton started on used soft tyres, whereas Filippi opted for new hards. Filippi stopped on lap eight to change to used hards on the rear only, with Chilton stopping five laps later for a set of new hards. He came out just ahead of Filippi, but the Italian overtook him into the Ascari chicane. Addax driver Johnny Cecotto tried a different strategy, changing from new softs to new hards on lap 13 after saving his tyres in qualifying. He eventually finished in second, having started from eighth on the grid following a penalty. The GP3 title could have been won on Saturday, but in a dramatic twist of events polesitter Evans was forced to retire early in the race – and then championship challengers Antonio Felix da Costa and Aaro Vainio were also unable to capitalise on the opportunity. This left Evans – who retained the championship lead despite his retirement in the feature race – and Lotus driver Daniel Abt as the only contenders, separated by 14 points. Abt started the GP3 sprint race on Sunday in eighth while Evans started last, but the German driver had to win in order to have any chance of taking the title. Incredibly, Abt was on course to do this, until he was passed by Manor driver Tio Ellinas. There were no pit stops during the second GP2 race on Sunday, which was won by Caterham’s Davide Valsecchi, who extended his championship lead heading into the final round. With just one set of P Zero hard tyres for the 21-lap race, drivers had to look after their tyres to avoid them going off, which led to plenty of overtaking in the closing stages. Pirelli’s racing manager Mario Isola commented: “We enjoyed an action-packed weekend in Italy, but first of all I’d like to congratulate Mitch Evans and MW Arden on a well-deserved title win that was taken under almost unbelievable circumstances, ending what was probably the most spectacular and competitive season we have seen in our three years of supplying GP3. Next year there will be a new GP3 car and some new tyres for it, so this is a fantastic way to say goodbye to the current GP3 formula. I’d also like to congratulate Luca Filippi on a fantastic GP2 win on Saturday, which was made all the more special as he has been out of a car for so long. We saw some good tactics from Johnny Cecotto as well, who saved tyres in qualifying in order to have new sets for the race and made up six places. On Sunday, Davide Valsecchi typically looked after his tyres perfectly to win from third on the grid. This important skill is one of the reasons why he now has a good lead of the championship going into the final round.” With the GP3 Series now over, there is just one deciding round left to go in GP2 at the Singapore Grand Prix from September 21-23.

Copyright-free video news releases featuring interviews with Paul Hembery, as well as photographs and press releases are available for media use from: www.pirelli.com/f1pressarea. Follow us on Twitter @ Pirelli_Media or Facebook on www.facebook.com/Pirelli