GP3 gets underway and GP2 resumes with Pirelli in Barcelona 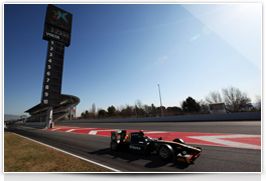 Barcelona is the first event of the year to host both the GP2 Series and GP3 Series during the same weekend, with both championships supplied by Pirelli. This is round four of GP2, with one round in Malaysia and two in Bahrain already gone, while the GP3 season gets underway this weekend. Throughout 2012, Pirelli will supply over 10,000 tyres to the GP3 Series, including all the official test sessions. As was the case in 2011, three types of dry weather compound (hard, medium and soft) and one type of wet weather compound will be produced, with just one slick compound nominated for each race. At races, three sets of slicks will be allocated to each car per weekend, along with two sets of wet tyres if necessary. There is deliberately quite a big step between the compounds in GP3, so that the drivers are well-equipped to deal with all the different characteristics of the circuits they race on. In Barcelona the hard compound will be available to the GP3 drivers. This is one of the most demanding circuits on the calendar, particularly for the front-left tyre, which has to absorb significant amounts of lateral energy. The teams have previously tested at Barcelona with this tyre in March, so they have some idea of what to expect, even though ambient temperatures were lower than they are expected to be this weekend. The weather is another factor that increases the demands placed on the P Zero rubber in Barcelona, along with the abrasive track surface. The GP2 drivers, by contrast, have a choice of compounds: the hard and the soft tyre, just as is the case for Formula One at Barcelona this weekend. However, as usual they will have three sets of the harder compound and only one set of the soft compound available to them – so the drivers will need to consider when to use them very carefully. Only the first GP2 race of the weekend – Saturday’s feature race – contains a mandatory pit stop (during which at least two wheels must be changed) while drivers are obliged to use a new set of the harder compound during the sprint race on Sunday morning, where they race from start to finish on the same tyre. The soft tyre is expected to come into its own during qualifying, and as a key element of the race strategy on Saturday. Both GP3 races take place without any pit stops, but the drivers still have to know all about tyre management. Pirelli’s P Zero GP3 compounds – which come in 13-inch size, just like Formula One – are designed to deliberately degrade with a specific window of peak performance. This is so that the drivers can learn how to get the best out of them and how to formulate a race strategy. 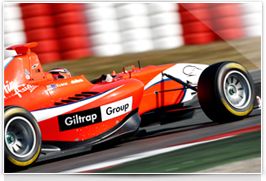 The GP3 drivers will take to the track for the first time on Friday 11 May, with free practice at 0830 for 45 minutes. They then have qualifying for half an hour on Saturday morning at 0945, followed by race one on Saturday afternoon at 1720. Race two takes place on Sunday morning at 0925. Both races last for 16 laps, with the grid for race two formed of the top eight finishers in race one reversed. There are 10 three-car teams in GP3, all using identical Renault-powered two-litre turbo Dallaras. The GP2 weekend gets underway with the half-hour practice session on Friday 11 May from 1200-1230. The drivers then qualify from 1600-1630. Race one takes place at 1540 on Saturday, lasting for 37 laps. Race two takes place on Sunday morning before the Spanish Grand Prix, lasting for 26 laps. A total of 13 two-car teams compete in GP2, using a Dallara chassis matched to a normally-aspirated V8 Mecachrome engine, which results in lap times that are close to those of Formula One. Pirelli’s racing manager Mario Isola commented: “It’s going to be a busy weekend for us in Barcelona, as we have Formula One, GP2 and GP3 racing together for the first time this year. However, this is also a great opportunity for everybody to see how the three championships complement each other, and this was very much the philosophy that we had when designing the tyres for each series, as part of a ladder of talent that can take drivers all the way up to Formula One. The characteristics of the tyres in GP3 are intended to prepare drivers for what they will face in GP2, while the tyres and the regulations in GP2 have some aspects in common with Formula One. The winner of GP2 race one in Barcelona last year was Charles Pic, who is competing in Formula One this year, so that is a good example of the theory working in practice. Barcelona is certainly one of the most demanding tracks of the year that the drivers will face when it comes to managing their tyres, due to the high levels of wear and degradation that we can expect. Both in GP2 and GP3, an intelligent approach to the race will pay dividends.”

GP3 gets underway and GP2 resumes with Pirelli in Barcelona
Newsroom