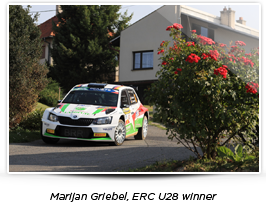 Aftero winning his class in a Pirelli-equipped Skoda Fabia R5 on the Barum Czech Rally, Germany’s Marijan Griebel can no longer be caught by any of his rivals on the Under 28 European Junior Rally Championship. As a result, he wins a prize drive at the wheel of a World Rally Car on a European round of the World Rally Championship next year.

• SUCCESS FOR PIRELLI IN THE BARUM RALLY: The Barum Rally – round six of eight in the FIA European Rally Championship – reinforced Pirelli’s leadership in every category. Pirelli’s reigning European champion Kajetan Kajetanowicz heads the overall standings, having finished fifth in the Czech Republic with his Ford Fiesta R5, while Alexey Lukyanuk in a similar car finished runner-up to event winner Jan Kopecky, and is making his way back up the championship table.

There was a double triumph for Polish driver Aleks Zawada in an Opel Adam, who was first in the Under 27 European Junior Rally Championship classification, and the top two-wheel drive car home in ERC3. Zawada and Englishman Chris Ingram, driving another Opel Adam, lead the championship standings, while Ford Fiesta driver Bugra Banaz is also on the ERC3 championship podium.

Opel Adam driver Tamara Molinaro reinforces her lead of the Ladies’ Championship thanks to her second place in the Czech Republic.

The Pirelli drivers had hard and intermediate P Zero tyres at their disposal on the fast and challenging Czech asphalt stages, along with Pirelli Cinturato tyres in case of rain. However, conditions meant that the drivers used hard compound Pirelli RK5 tyres for the majority of the event.

Quotes Marijan Griebel “It hasn’t quite sunk in yet that I’ve won the Under 28 title: I only know that it’s a dream come true and I’m so happy. I need to thank my whole team for all their hard work and also my Pirelli tyres, on a rally that was incredibly tricky and challenging from start to finish.”