Guintoli and Rea share the wins after another dramatic Assen raceday 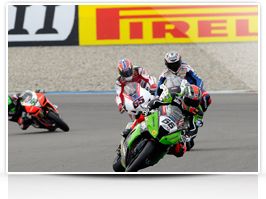 Changeable weather conditions played a major part in proceedings during raceday at Assen, with the first race stopped and then re-run over only nine laps, and the second race bringing forth a variety of tyre choices on a damp initial track surface that saw the podium places change frequently. In race one Sylvain Guintoli (Effenbert-Liberty Ducati) took his first ever race win in SBK and the first for his team, while in race two a bad choice for 2011 champion Carlos Checa (Althea Racing Ducati) saw him out of the points. Honda World Superbike team rider Jonathan Rea took his first win of the year in the second full 22-lap race. “The Assen round was the scene of great excitement, providing very spectacular races for all WSBK enthusiasts with the contribution of extremely fickle weather conditions. In fact, rain showers alternated with sunshine, making tyre selection strategies fundamental. For Superbike, slick tyres were used for the first 13 laps of race 1 and almost all the riders opted for the SC1 (R300) solution on the rear, introduced for the first time this year during the Imola round as a development of the standard SC1, but more suitable for use in lower temperatures. After the race was red flagged due to rain, for the remaining 9 laps of race 1, on the other hand, the riders all used rain tyres. Race 2, declared as a wet race even though it wasn’t raining at the start, played some nasty tricks on a few riders, including Carlos Checa (Althea Racing) who, convinced that rain was on the way, decided to start with two rain tyres and was then forced to come into the pits to change tyres, mounting two slick solutions, but loosing time and any possibility of another podium. This was certainly a weekend rich with satisfaction for Sylvain Guintoli and the Effenbert Liberty Racing team as well as for Jonathan Rea (Honda World Superbike Team) who nailed the right solutions for both races. My compliments also to Lorenzo Lanzi who surprised everyone in his debut Supersport race by taking the top step of the podium." Giorgio Barbier, Racing Director, Pirelli Moto Pirelli BEST LAP Awards: SBK Race 1 – Sylvain Guintoli (Team Effenbert Liberty Racing), 1'57. 793 (Lap 9) SBK Race 2 – Carlos Checa (Althea Racing), 1'38.092 (Lap 16) Total BEST LAP (SBK): Checa C. (Althea Racing): 3, Tom Sykes ( Kawasaki Racing Team): 1; Biaggi M. (Aprilia Racing Team): 1, Sylvain Guintolì (Team Effenbert Liberty Racing): 1 WSS – Lorenzo Lanzi (Prorace),  1'59.828  (Lap 17) Total BEST LAP (WSS): Foret F. (Kawasaki Intermoto Step): 1, Parkes B. (Ten Kate Racing Products): 1, Lorenzo Lanzi (Prorace): 1 Stk1000 – Sylvain Barrier (BMW Motorrad Italia  Goldbet ), 1’40.187 (Lap  6) Stk600 – Alex Schacht (Schacht Racing SBK ONE), 1'41.860 (Lap 9) Max Biaggi (Aprilia Racing) now leads the championship with 92 points even though he was fourth and eighth today. Checa is second but only one point behind, while third ranked rider Tom Sykes (Kawasaki Racing Team) had to retire from race one, and dropped from a potential podium to sixth in race two, leaving him 13 points from the lead. The weekend crowd of 56,000 were treated to some incredible action, particularly in the abandoned part of the first race and again for the final podium spot in race two, when a photo finish was required to separate fourth and fifth place riders. A day of firsts and landmarks for the podium finishers saw Davide Giugliano (Althea Racing Ducati) take second in race one, ahead of Checa, and Eugene Laverty (Aprilia Racing Team) take his first Aprilia podium. Race 1 An incredible first race, eventually run over nine wet laps, was won by Guintoli, a rider who has threatened to win a race on many previous occasions. His margin of advantage was 2.6 seconds, from a very determined rookie Giugliano and his team-mate Checa. Their fight for the podium places was just one of many highlights in the wet race, after the first attempted contest had started out dry, but was halted when several leading riders fell as the rains came down. By regulation a whole new race was declared and the only influence the first leg finishing order had was to determine grid places for the ‘real’ second race. In fourth place in an all Aprilia racing battle, Max Biaggi beat Eugene Laverty. Early leader Leon Haslam (BMW Motorrad Motorsport) fell and no-scored. Sylvain Guintoli: “We’ve been trying to catch that first victory for a while now. Since the start of the season we have showed that we have pace, but the results haven’t come. Finally I did it today. For me it’s a fantastic feeling, this race was crazy with a lot of crashes and I nearly crashed as well. It’s the first race since the accident to Joan and I want also to dedicate this win to him as well.” Davide Giugliano: “It’s a very emotional moment because you don’t expect to get this result in your third race. We knew that Assen was a good circuit for us and we could get a good result. For sure the conditions were not great, but I was up front, a bit ‘lost’ even because I found myself up against guys I had only seen from a distance before now.” 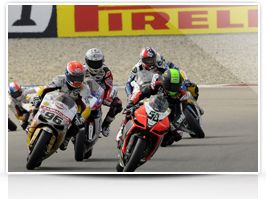 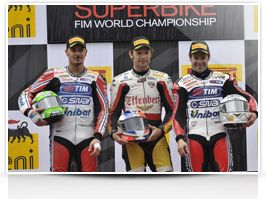 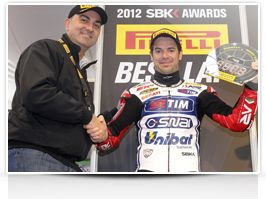