History for BMW and Melandri

A 48,500 strong crowd saw some astounding race action at Donington in two sun-blessed 23-lap races, which culminated in a moment of history for one of the world’s most important motorcycle manufacturers, some of the best SBK racing ever seen and changes near the top of the eni FIM Superbike World Championship table. 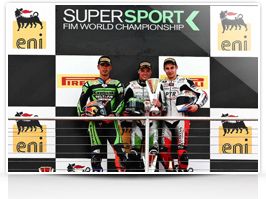 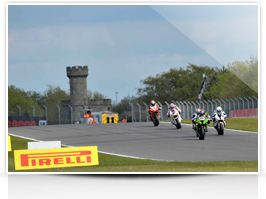 After Marco Melandri (BMW Motorrad Motorsport) won the first race, the German manufacturer added its name to the list of race-winning makes for the very first time. In race two a classic multi-rider battle ended up in joy and heartbreak for some top riders, as Jonathan Rea (Honda World Superbike Team) came out on top after a final corner melee. The end result of one of the best days of racing imaginable is that Max Biaggi (Aprilia Racing Team) leads the championship with 128.5 points, from double podium man Tom Sykes (Kawasaki Racing Team) on 123, and Rea on 108. Carlos Checa (Althea Racing Ducati) is fourth on 105.5. The top four championship places are now covered by only 23 points, after five rounds and nine individual races. 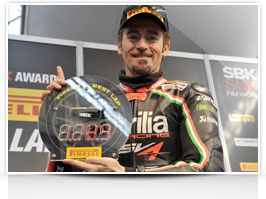 Race 1 A truly historic 1-2 for BMW saw Melandri win the opening race with his team-mate Leon Haslam only 0.728 seconds behind. An eventual five rider fight for the podium places provided overtaking and personal duels aplenty as the race order changed multiple times. Tissot-Superpole winner Sykes won a tense battle to go third, with Rea making up places in the final laps to overhaul Biaggi and take fourth. The leading five were covered by only 2.102 seconds at the end of the race. Checa was sixth, four seconds from the win, making it five different manufacturers in the top six at the flag. Melandri’s win also means that six different riders have now won races this year, representing five different manufacturers – and all with nine rounds and 18 races left to go. Marco Melandri: “It means a lot to me to win this for such a good factory like BMW, it’s history and something I could not dream about when I was young. I just want to say thanks to BMW in Germany, the team on track and everybody involved in the project. We have been working so hard and we never give up even when we found some difficulties. We are working still right now to stay at the top and I am so happy to be here. I had good race pace yesterday and today the tyres have been working very good until the end. We managed the situation well but at the beginning I was not so fast, but fortunately Tom and Leon were fighting a lot so they lost a bit of time and we could catch them again. We are so happy for this win.” Leon Haslam: “I found myself on the wrong side of Marco, on the right side of him into the Esses and I nearly went into the back off him so I had to let off the brakes and I am disappointed because I did feel quite good up to that point. Fair play to Marco and we got a BMW 1-2 which is fantastic. Hopefully we can make amends in the next one and not make that mistake. I want to dedicate this result to the late Robert Fearnall, who was a big, big friend of the family and Donington.” Tom Sykes: “A fantastic race, I really enjoyed it and it certainly felt like a long, seemed to go on for many laps. Overall I think we had a very good show, lots of passing, and a little bit too much at some corners, especially at the Foggy Esses, which seemed to claim a few victims. Overall I am very happy to be on the podium and collecting some good solid points again with the Ninja ZX-10R. Unfortunately we seemed to struggle at one particular part of the track and that definitely affected our race performance, but hopefully we can improve on that very small sector and go better in race two. As for now a podium is good enough.” Results: 1. Melandri M. (ITA) BMW S1000 RR 34'26.736; 2. Haslam L. (GBR) BMW S1000 RR 0.728; 3. Sykes T. (GBR) Kawasaki ZX-10R 1.609; 4. Rea J. (GBR) Honda CBR1000RR 1.819; 5. Biaggi M. (ITA) Aprilia RSV4 Factory 2.102; 6. Checa C. (ESP) Ducati 1098R 4.820; 7. Giugliano D. (ITA) Ducati 1098R 7.520; 8. Guintoli S. (FRA) Ducati 1098R 7.927; 9. Camier L. (GBR) Suzuki GSX-R1000 15.144; 10. Fabrizio M. (ITA) BMW S1000 RR 16.065; 11. Badovini A. (ITA) BMW S1000 RR 19.805; 12. Davies C. (GBR) Aprilia RSV4 Factory 20.170; 13. Berger M. (FRA) Ducati 1098R 21.274; 14. Smrz J. (CZE) Ducati 1098R 21.517; 15. Laverty E. (IRL) Aprilia RSV4 Factory 26.920; 16. Baz L. (FRA) Kawasaki ZX-10R 35.025; etc. Race 2 Rea took his second win of the season after an incident-strewn Race 2 at Donington. On the first corner Checa and Eugene Laverty (Aprilia Racing Team) touched and Checa went down, taking out Jakub Smrz (Liberty Racing Team Effenbert Ducati) and Checa’s team-mate Davide Giugliano. Then Laverty himself crashed heading down Craner Curves as eventual third place man Sykes led for most of race distance. He was finally overhauled by a warring faction which included eventual second place man Biaggi plus Haslam and Melandri. After a multitude of overtakes and riders running off track on occasion, Haslam looked to have it won until both he and Melandri ran wide as the Italian attempted a pass into the very last corner and Rea pushed inside as a gap opened up. He and Haslam collided and Haslam fell, knocking off Melandri with his stricken bike as he slid across the track. Rea held on to win by just over half a second from Biaggi, with Sykes two second back in third place. Leon Camier (Fixi Crescent Suzuki) was an impressive fourth. 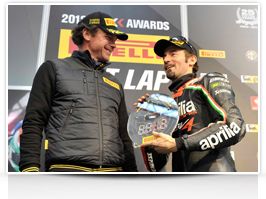 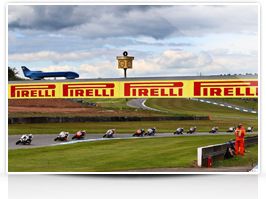 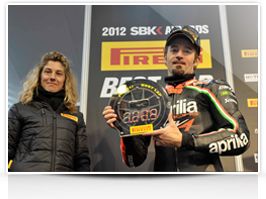 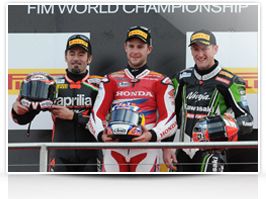 Points (after 5 of 14 rounds): 1. Biaggi 128.5; 2. Sykes 123.5; 3. Rea 108; 4. Checa 105.5; 5. Melandri 97.5; 6. Haslam 89; 7. Guintoli 85; 8. Laverty 65; 9. Giugliano 50; 10. Smrz 44.5; etc. Manufacturers: 1. Ducati 161.5; 2. Aprilia 139; 3. BMW 131; 4. Kawasaki 129.5; 5. Honda 112; 6. Suzuki 40.5. World Supersport In winning his first ever WSS race British rider Sam Lowes (Bogdanka PTR Honda) became the fifth different winner in five races this season and the third in a row on a Honda machine. Having struggled on with a stomach bug of some kind since Friday, and suffering a serious finger injury in a fall on Saturday, Lowes had to work hard to resist a late push from eventual second place finisher, Kenan Sofuoglu (Kawasaki DeltaFin Lorenzini). Lowes came within 0.003 seconds of setting a new lap record in his efforts to keep the Turkish rider behind him on the penultimate lap, and is now only six points from Sofuoglu in the championship. Third place today was taken by third ranked rider overall, Jules Cluzel (PTR Honda). Broc Parkes (Ten Kate Racing Products Honda) was in the early fight for the podium places but dropped back to fourth, while Glen Richards (Smiths Gloucester Triumph) finished fifth today and Sheridan Morais (Kawasaki DeltaFin Lorenzini) sixth. Results: 1. Lowes S. (GBR) Honda CBR600RR 33'43.603; 2. Sofuoglu K. (TUR) Kawasaki ZX-6R 0.678; 3. Cluzel J. (FRA) Honda CBR600RR 3.987; 4. Parkes B. (AUS) Honda CBR600RR 8.088; 5. Richards G. (AUS) Triumph Daytona 675 11.786; 6. Morais S. (RSA) Kawasaki ZX-6R 20.849; 7. Quarmby R. (RSA) Honda CBR600RR 23.795; 8. Debise V. (FRA) Honda CBR600RR 24.094; etc. Points (after 5 of 13 rounds): 1. Sofuoglu 81; 2. Lowes 76; 3. Cluzel 64; 4. Foret 55; 5. Parkes 42; 6. Baldolini 38; 7. Quarmby 34; 8. Morais 27; etc. Manufacturers: 1. Honda 111; 2. Kawasaki 106; 3. Triumph 51; 4. Yamaha 43; 5. Suzuki 6. Official Tyre Supplier "This weekend on English soil provided truly great and heated races for both Superbike and Supersport. The work done during the tests at Imola proved to be very important: in Superbike the R302 solution for the rear, developed from this year's standard SC1, designed to work at lower temperatures and to prevent cold tearing, was quite popular with pretty much all the riders. In Supersport as well, the R303, also a development of the SC1, was chosen by various riders. For this reason, given the excellent feedback received, we will definitely see these two solutions again in some of the future championship races. The Superbike Championship competition is very tight every year, and this year is no exception: in race two six different manufacturers crossed the finish line in the top six places, which shows just how much Pirelli's work contributes to placing all the teams in optimum conditions to be able to realistically aspire to the world title. In addition to congratulations to Marco Melandri and Jonathan Rea, respectively the winners of race 1 and race 2, my compliments go to Max Biaggi who had the best lap in both races as well as Sam Lowes, current ranking leader of the Pirelli Supersport best lap awards" - Giorgio Barbier, Racing Director, Pirelli Moto

History for BMW and Melandri
Newsroom