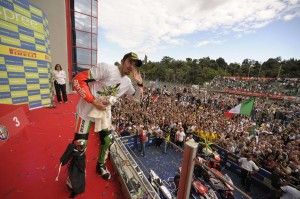 Variable conditions seen during Superpole sessions on Saturday left surprising results when the factory Kawasaki took its first pole since 2007 on Diablo Rain tyres in the semi-wet final session.  On race day we saw an unexpected 41°C track temperature, forcing many teams to change their setups from the previous two days.  With over 4100 tyres transported to this last Italian round including 2 new front and 2 new rear solutions for SBK and 2 new rear tyres for SSP developed in mid-season tests, Pirelli’s Diablo Superbike and Diablo Supercorsa solutions for Imola were ample enough to handle all weather conditions.  Race 1 proved to be 4,5 seconds faster and awarded Haslam (Suzuki) with both the Pirelli Best Lap and lap record of 1’48.966.  Haga (Ducati) even put in his best lap of the race on the last lap to join the two private Ducati bikes of Checa (Althea Racing) and Lanzi (DFX Corse).  Race 2 saw a similar performance to last year, with Checa (Ducati) utilizing the new “B” SC1 and “A” SC0 race-winning solutions to find a double victory and to secure his seventh Pirelli Best Lap / lap record of 1’48.877.  With the entire grid on the new DIABLO SUPERBIKE SC0 rear tyre, Pirelli may begin confirming solutions like this one for our 2011 production range of tyres. Sincere congratulations to Max Biaggi and the Aprilia Racing team for their first FIM SBK World Championship, accomplished less than 2 years after the start of the Italian brand’s renewed WSBK project.