With the race red flagged on the thirteenth lap due to a bad crash byLaverty, the Ducati riding Welshman wins the first race of the weekend ahead of Rea's Kawasaki and teammate Marco Melandri

Ducati rider Chaz Davies won the first MOTUL FIM World Superbike Championship race of the weekend at the Enzo and Dino Ferrari circuit in Imola. The team Aruba.it Racing – Ducati Welshman, after taking pole position in the morning, won Race 1 ahead of the Kawasaki ridden by Jonathan Rea, defending World Champion and current leader in the overall standings, followed by Davies' teammate, Italian Marco Melandri, who finished on the third step of the podium. The race, dominated by Davies from start to finish, was stopped before all nineteen laps could be raced due to a bad crash involving the team Milwaukee Aprilia rider during the fourteenth lap after contact with Alex Lowes (Pata Yamaha Official WorldSBK Team).

There were also good results for Pirelli, able to gather important information from this race, albeit with less laps than foreseen, on the solutions brought to Imola. In particular, the new V0602 rear development solution in soft compound that the riders had never used in a race until today proved to be the most used solution on the rear. It will therefore be interesting to see its potential in Race 2 and possibly in subsequent rounds of the Championship. 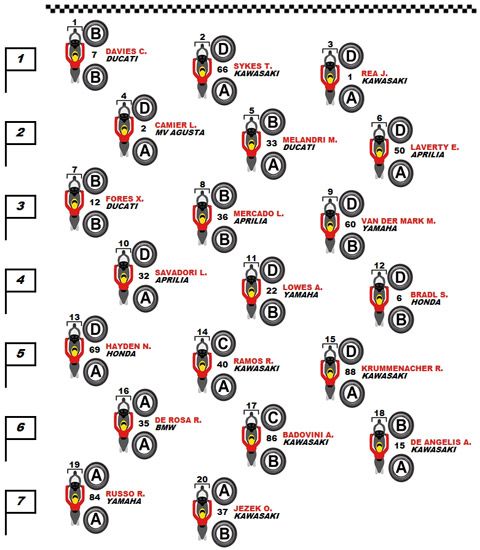 Tyres selected at the start