In Sardinia was the opening of Internationals of Italy of Motocross: Pirelli wins with Cairoli and Jonass

Cairoli dominates the Elite class, Jonass the MX2 The first round of the ‘Internazionali d’Italia di Motocross’ championship, held in Riola Sardo, in the province of Oristano (Sardinia), has started the 2015 season of international motocross racing. The track 'The Dunes', few miles far from the Gulf of Oristano and near the Cabras pond, one of the largest wet ecosystem in Europe, is characterized by a sandy ground similar to that typical of the tracks of northern Europe, that makes it very technical and challenging. 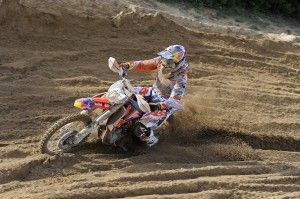 In Sardinia was the opening of Internationals of Italy of Motocross: Pirelli wins with Cairoli and Jonass