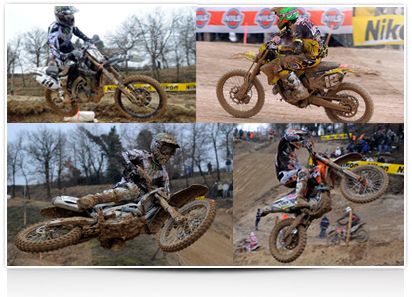 While in Holland the second round of the national MX2 series was obtained by factory KTM rider Jeffrey Herlings with his Pirelli Scorpion MX-shod 250SX-F, in Italy the tyre dominated all three classes in the domestic ‘Internazionali d’Italia’ championship. In MX1 the MidSoft 32, with 110/90-19, was the choice of the Pirelli riders, five of whom filled the first seven positions with overall victory going to Yamaha’s David Philippaerts with 1st and 3rd positions in the motos. The Italian was ahead of world champion Antonio Cairoli, who now fronts the standings. The podium was completed by Steven Frossard and the Frenchman is third in the points table, just behind team-mate Philippaerts. Monster Energy Yamaha rider Gautier Paulin marked his second MX2 victory in succession and used the MidSoft 32 on this occasion with dimensions of 120/80-19 and was ahead of Marco Maddii in third; Pirelli representatives were also found in the forms of Michael Mercandino, Christophe Charlier and Matteo Aperio who were 4th, 5th and 6th respectively. A winning debut was enjoyed in the Under 17s with the MidSoft 32 110/85-19 thanks to Suzuki-Castellari pilot Simone Zecchina who continues to front the competition. The fourth and final round of the ‘Internazionali d’Italia’ will take place on March 27 at Odolo (Brescia). MX1 Overall Classification: