Jonathan Rea crowned FIM Superbike World Champion on Kawasaki for the second year in a row, Pirelli announces the new standard solutions for 2017

After breaking the track record to win Superpole, the Northern Irishman clinches the title after Race 1, finishing second behind Ducati rider, Chaz Davies

Under the lights that illuminate the Losail International Circuit at Doha, the setting for the last round of the MOTUL FIM World Superbike Championship season, Northern Irish rider, Jonathan Rea of the Kawasaki Racing Team was crowned FIM Superbike World Champion today for the second consecutive year.

The twenty-nine year-old, who finished second in Race 1 behind Ducati rider Chaz Davies (Aruba.it Racing – Ducati), race winner, has been with the Kawasaki team since last year and, since his arrival, he has led the Akashi-based manufacturer in winning both the Manufacturers Title and the Riders Title. Rea arrived at this last round with a 48-point advantage over his teammate, English rider Tom Sykes, who had to settle for fourth place in the race and second place in the Championship. 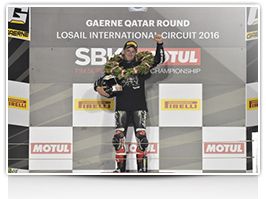 From the point of view of Pirelli, Official Sole Tyre Supplier for all the categories in the FIM World Superbike Championship since 2004, this final round was a casting out nines to assess the performance of some of the solutions introduced this year. Specifically, given the popularity and excellent performance on various circuits and in various racing situations, Pirelli decided to promote two of the development solutions to standard solutions for 2017. The solutions in question are the rear V0377, which will become the new standard SC0, and the front U0176, which will become the new standard SC1. In Superpole®, Rea made it abundantly clear straight away that he was eager to end the battle for the championship title as soon as possible and, with a time of 1’56.356, not only did he take the best position on the starting grid, but he also broke the track record set by his teammate, Tom Sykes in 2015 by almost half a second. This is an important result, achieved partly thanks to the new Pirelli qualifying tyre that has contributed to breaking various records this year. In Race 1, Rea administered the championship result. Chaz Davies (Aruba.it Racing – Ducati) got off the line well, overtaking both the Northern Irishman and Nicky Hayden (Honda World Superbike Team) to take the lead. In fourth place it was Tom Sykes, who managed to overtake Sylvain Guintoli (Pata Yamaha Official WorldSBK Team). The top two positions would remain unvaried for the entire race, with Hayden, Sykes and Guintoli taking turns in third. In the end, the Frenchman had the upper hand and crossing under the wire behind the Welshman and the new 2016 World Champion. 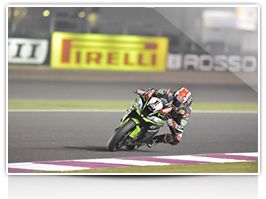 Race 1 standings: 1) Chaz Davies (Aruba.it Racing – Ducati) 2) Jonathan Rea (Kawasaki Racing Team) 3) Sylvain Guintoli (Pata Yamaha Official WorldSBK Team) 4) Tom Sykes (Kawasaki Racing Team) 5) Nicky Hayden (Honda World Superbike Team) 6) Xavi Forés (Barni Racing Team) 7) Alex Lowes (Pata Yamaha Official WorldSBK Team) 8 ) Jordi Torres (Althea BMW Racing Team) 9) Michael Van Der Mark (Honda World Superbike Team) 10) Lorenzo Savadori (IodaRacing Team) … The Pirelli solutions chosen by the riders for Race 1: Since the races in Qatar are held at night, the asphalt temperatures are never exceedingly high, but they are without a doubt high enough to be able to use a soft rear solution. In Race 1 on the rear, the riders unanimously opted for the V0377 SC0 development solution (option A). Pirelli brought this solution for the first time to the Donington Park round and then to Misano, Lausitzring, Magny-Cours and Jerez as well, and it has always been very well received by the riders, which is why this will be the new standard SC0 in 2017. As for the front, most of the riders (18 out of 25) chose the U0176 SC1 development solution (option B) that made its début just this year at the Assen round and was then on the track at Misano, Lausitzring, Magny-Cours and Jerez as well. This tyre was also the most popular SC1 solution on the front throughout the year and therefore it will be promoted as the new standard SC1 next year. The only riders who did not use this solution for this race were Jonathan Rea, Nicky Hayden and Saeed Al Sulaiti, who instead chose a standard SC2 (option C), as well as Karel Abraham, who instead opted for the hardest solution in the range, the SC3 (option D). 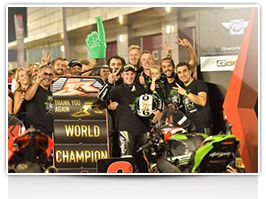