Egon Kaur has made it three wins from three starts in the FIA WRC Academy Cup following an impressive performance on Neste Oil Rally Finland, one of the most iconic and challenging events on the international calendar. 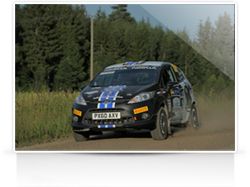 Armed with a Ford Fiesta R2 equipped with Pirelli’s medium-compound Scorpion K4 tyre, Estonian Kaur enjoyed a close battle with Irishman Craig Breen, one of six Pirelli Star Drivers in action on Rally Finland, which finished in the central city of Jyvaskyla yesterday evening (Saturday). Kaur’s victory, by a slender margin of 2.6s, means he continues to lead the young driver-training category at the halfway point of the season. “Egon has been very consistent all season but quite cautious on the first two rounds,” said Pirelli’s Motorsport Director Paul Hembery. “In Finland he had to really push, winning the rally on the penultimate stage, because Craig – not to mention a number of the other drivers – proved to be very fast. Our congratulations go to all the crews.” Pirelli’s engineers selected the Italian firm’s medium-compound tyre to provide consistent grip on the high-speed corners and stability over the flat out crests in a wide range of ambient and ground temperatures. Although much of the event was held in hot and dry conditions, overnight rain on Friday created a damp surface on sections of the early morning stages. With regulations limiting crews to a total of 18 covers for the pre-event test and rally, drivers also had to perfect the art of effective tyre management. This practice proved particularly challenging when the gravel roads became rutted in places during the second passes on Saturday afternoon. Despite the demanding conditions, only three punctures were recorded although all of these were caused by accidental impacts. “Rally Finland is ranked as one of the most demanding events on the international calendar due to its combination of high-speed corners and blind crests,” Hembery continued. “The challenge for our medium-compound Scorpion K4 was to provide good grip on the clean lines and good stability in the high-speed sections, a test they passed with flying colours. The tyre also provided a consistent performance in mainly warm weather conditions.” Pirelli is the official tyre supplier to the entry-level WRC Academy, which pitches 16 young hopefuls together on six WRC events on asphalt and gravel. They drive identical Ford Fiesta R2s prepared by the British M-Sport organisation. The WRC Academy Cup resumes on ADAC Rallye Deutschland, an all-asphalt event based in the historic city of Trier from 18-21 August. *** For further information contact: Anthony Peacock +44 7765 896930 anthony@mediatica.co.uk