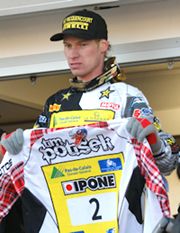 This week end, in front of a mass audience (almost 300 000 spectators), took place the Enduropale’s 6th edition (in its new version) on the Touquet-Paris Plage’s beaches in the north of France. 1050 riders were among the starters, representing 14 different nationalities. The Belgium Steve Ramon and the French Jean-Claude Moussé, respectively first and second, did the show with an exalting finish after more than 3 hours race. They were both equipped with the Pirelli Scorpion MX SOFT 410, as the pilot Adrien Van Beveren (4th) and Arnaud Demeester (5th), Milko Potisek completed the podium. For 8 years now, Pirelli demonstrates to be the best in beach racing. “We sell what we race, we race what we sell” Overall placing 1. Steve Ramon (BEL/Suzuki – Pirelli) 11 laps at 03h07’45“ 2. Jean-Claude Moussé (FREYamaha – Pirelli) at 46“ 3. Milko Potisek (FRA/Honda – Dunlop) at 4’53“ 4. Adrien Van Beveren (FRA/Yamaha – Pirelli) at 9’14“ 5. Arnaud Demeester (FRA/Yamaha – Pirelli) at 12’24“