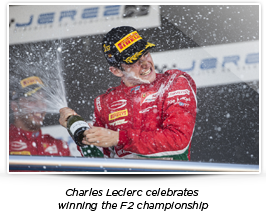 Feature Race, the winner: With his eighth victory of the season, Prema’s Charles Leclerc won the Feature Race to clinch the inaugural Formula 2 title of the modern era. Leclerc had built up a lead of more than 10 seconds from pole by the time he stopped to change from soft to the used medium tyres he had run in the early part of qualifying. After his stop, he emerged in the midfield and then set about passing the drivers who had started on the medium, before having to defend his lead when the Safety Car emerged close to the end of the race.

Charles Leclerc: “On the soft tyres we were very, very quick, but then we were struggling more on the medium. When I saw the Safety Car come out, I thought ‘OK, it’s going to get a lot harder now!’ but actually we managed to stay in front. In Formula 2, it’s clear that tyre management is a big part of the championship.”

Feature Race, alternative strategy: Prema driver Antonio Fuoco finished on the podium after starting 15th on the grid using the medium compound for his first stint. Following Leclerc’s pit stop, Fuoco took over the lead before moving to the faster soft for the final stint. His alternative strategy very nearly worked, assisted also by a late Safety Car that erased Leclerc’s advantage. In the end, Fuoco finished third: just under a second behind the winner.

Sprint Race, the winner: Tyre strategy was again a hallmark of the sprint race, with Leclerc and Fuoco opting to pit for soft tyres at just over the halfway point, to benefit from the extra speed of this compound. For a long time, it looked like this innovative tactics would work, before they began to slip out of contention at the very end: finishing seventh and fifth respectively. Russian time’s Artem Markelov won after taking the lead on lap 23, having run the medium tyres from start to finish. 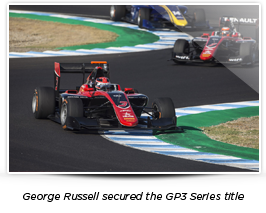 Feature Race, the winner: Nirei Fukuzumi led an ART one-two-three from pole, winning ahead of his team mates George Russell and Jack Aitken. Their intense battle allowed Fukuzumi to pull clear, claiming his second win of the season. The whole field ran on hard tyres, with very low levels of wear and degradation.

Sprint Race, the winner: Russell finished fifth to clinch the title at the end of the 17-lap race, while Jenzer’s Alessio Lorandi took his debut victory, leading from start to finish. The hard tyres allowed all the drivers to push to the maximum, despite the warm temperatures in Spain.

Pirelli’s head of car racing Mario Isola: “An exciting weekend in Jerez, with some tense races in both Formula 2 and GP3, crowned two very deserving champions. Both have won many races this year, and it’s no co-incidence that they have already been recruited as juniors by the top two teams in Formula 1. Tyre strategy was at the heart of both races in Formula 2 this weekend, with Leclerc and Fuoco opting for a radical strategy in the sprint race that came within one lap of working extremely well. As Leclerc says, managing the tyres properly is an essential part of Formula 2. In GP3, the hard tyre on the recently-resurfaced Jerez track proved to be extremely durable, with not so much tyre management needed on this occasion.”

Formula 2 and GP3 will resume for the final round in Abu Dhabi from November 24-26, back alongside Formula 1 after the one-off stand-alone race in Jerez.