Running on Pirelli tyres, Citroen driver Sebastien Loeb has claimed his sixth world driver’s title and 54th career victory on the Rally Great Britain, the final round of the 2009 FIA World Rally Championship. Loeb came into the Rally Great Britain just one point behind his only title rival, Ford’s Mikko Hirvonen. In the closest finale to the World Rally Championship since 2003, the two drivers fought each other closely over all three days of the gravel event. 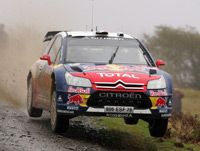 Despite this frenetic pace, with both drivers taking significant risks in order to gain an advantage, the performance of their soft compound Pirelli Scorpion tyres was flawless throughout the 348.30 competitive kilometres of the rally. Loeb and Hirvonen, who both experienced running first on the road on different days of the rally, took big cuts to find the quickest lines through the corners while pushing acceleration and braking to the limit. Their Pirelli Scorpion tyres absorbed the blows perfectly, despite the many sharp rocks that littered the route and soft stages that degraded badly during the second run. Conditions were also extremely variable, as is traditionally the case on Britain’s round of the World Rally Championship. Competitors had to deal with both torrential rain and bright sunshine, in temperatures that varied from eight to 20 degrees Centigrade. This made the roads both rough and slippery, yet the Pirelli Scorpion rubber cut through the mud to provide an excellent level of traction and grip in the adverse conditions. Loeb commented: “There was no room for error and we did not make any. I’m absolutely delighted to win this world title, which is one of the most rewarding of my career as we had to fight so hard for it. Despite the very tough conditions, the car and the tyres performed perfectly, allowing me to take the fight all the way to the finish without backing off.” Rally Great Britain was also the final round of the Production Car World Rally Championship, which like the main WRC also uses Pirelli tyres. The production category was won by Norwegian driver Eyvind Brynildsen in a Skoda Fabia S2000, underlining the efficiency of the Pirelli Scorpion soft-compound tyres on a wide variety of different cars. The 2009 Pirelli Star Driver scheme, which gives five drivers from FIA regional championships the opportunity to compete on six World Rally Championship events, drew to a conclusion in Britain. Czech driver Martin Semerad was the quickest of the Pirelli Star Drivers through the Welsh forests, after Finland’s Jarkko Nikara slipped off the road on day two. Pirelli’s rally manager Mario Isola concluded: “We have witnessed a very exciting battle for the title and we are delighted that our tyres helped give the two protagonists the opportunity to fight for it until the very end of the season. We would like to congratulate Sebastien Loeb, his co-driver Daniel Elena, and Citroen for claiming their second successive world championships using Pirelli tyres. This has been a very closely-fought season, during which our tyres have impressed all the competitors with both their strength and consistent performance - on asphalt and gravel.” The 2010 World Rally Championship kicks off in just 16 weeks with the Swedish Rally from February 12-14. Next season is the last year of Pirelli’s current three-year contract with world motorsport’s governing body, the FIA, to supply the World Rally Championship with control tyres. The Italian firm will shortly start work on its tender to renew the deal into the future.