Magalhaes storms to victory on debut with Pirelli 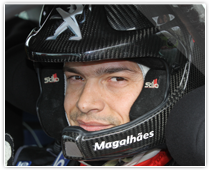 Pirelli provided Bruno Magalhaes with a winning advantage last weekend as the Portuguese driver claimed a victory on the demanding Rally Vinho da Madeira, round seven of the European Rally Championship.

The Madeira-based event marked the first time that Magalhaes has used Pirelli’s RX5B hard compound tyres but despite his lack of experience using Pirelli rubber, the 32-year-old drove a faultless rally from start to finish at the wheel of a Peugeot 207 S2000. At the end of the two-day event, Magalhaes had established a 10.2 second lead over fellow countryman Vitor Sa who finished runner-up.
With temperatures soaring close to 40 degrees Celsius, the RX5B hard compound tyres proved the perfect choice for the stifling conditions and pounding terrain that challenged crews competing on the Portuguese archipelago.
Pirelli’s product manager, Terenzio Testoni, commented: “Madeira proved to be a true rally of attrition with the abrasive road conditions and temperatures that reached well above 35 degrees. But Bruno drove a perfect rally, and we are very pleased with his progress considering this was his first competitive rally using Pirelli rubber.  He told us that he was impressed with both the consistency and stability of the tyre, especially under such difficult road conditions.”
For further information please contact: Anthony Peacock +44 7765 896930 anthony@mediatica.co.uk
Website: www.pirelli.com
Twitter: @Pirelli_Media, @paulhembery
Facebook: www.facebook.com/Pirelli

Magalhaes storms to victory on debut with Pirelli
Newsroom