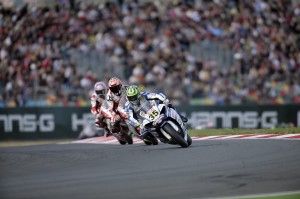 Under especially splendid French weather where track temperatures reached 30°C, the conditions were adequate for Pirelli's new compound Qualifier, with which Crutchlow put his Yamaha on pole recording new Best Lap of 1'37.699 in the third session. Many SBK riders performed well in the two races with the new "A" soft rear tyre solution (SC1) and one of the three available front solutions, among which were the "B" and "C" (new SC1 and SC2) as well as the "A" reference tyre for 2010.  Nearly the entire SSP grid chose the "A" front and "A" rear tyre solutions, which correspond to the new SC2 compound Diablo Supercorsa pair. Pirelli closes the 2010 WSBK racing season with excellent development results: five new Diablo Superbike solutions from SBK, three new Diablo Supercorsa solutions from SSP and one new size from Stk1000 (200/55R17) have been confirmed for Pirelli's racing range for 2011.  With the recent championship title awarded to Aprilia, SBK has now seen five manufacturers earn the prestigious title of Superbike World Champion since Pirelli became sole tyre supplier in 2004, while in all the 16 years prior, only three manufactures obtained the title.  Pirelli congratulates the 2010 Pirelli Best Lap award winners, Cal Crutchlow (Yamaha) and Kenan Sofuoglu (Honda) and all the riders competing in this season for their impressive efforts and valuable feedback.