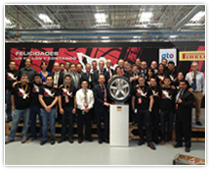 Pirelli’s factory in Silao, Mexico has produced its millionth tyre. Celebrating the event with Pirelli were the Governor of Guanajuato, Miguel Márquez Márquez, and Guanajuato’s Secretary for Economic Development, Héctor López Santillana, who were received by the CEO for the NAFTA Region, Paolo Ferrari, and Pirelli Operations Director, Giuliano Menassi. During the ceremony, the Governor of Guanajuato stressed how the region is becoming increasingly important as regards the automotive sector thanks to the presence of international companies such as Pirelli that promote rapid growth for the sector in Mexico and Latin America as a whole. The facility was opened on 31st May 2012 and its tyre production covers the United States, Canada and the growing demand from the local market. It is estimated that 60% of Pirelli tyres sold in the NAFTA area will be manufactured at Silao. Pirelli’s overall investment up until 2017 will be around 400 million dollars. Furthermore, the new hi-tech factory will turn increasingly to the development of state-of-the-art manufacturing processes, including the Green Performance project for environmentally-friendly premium tyres.