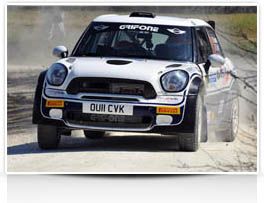 Running on Pirelli tyres, the brand-new MINI has claimed its first-ever overall rally victory. Andrea Navarra, co-driven by Simona Fedeli, won the Rally dell’Adriatico in Italy, driving the Regional Rally Car version of the MINI run by the well-known Grifone team. The MINI John Cooper Works is built to the latest Super 2000 regulations, forming the basis of the John Cooper World Rally Car that will make its debut on the Rally d’Italia-Sardegna in May. Using Pirelli Scorpion K6 gravel tyres, Navarra led from the start to the finish of the opening round of the Italian Gravel Championship, based on Italy’s Adriatic coast close to Ancona. Navarra used three sets of tyres in the nine stages that made up the 100-kilometre event to win by 12 seconds on only the MINI’s third competitive outing. Navarra, who clinched the Italian Championship with Pirelli and Subaru in 2004, said: “It’s a great honour for me to give MINI this first victory with Pirelli and another milestone in our history together. It was a fantastic rally that was competitive from start to finish: we had to push hard but in the end we got the result that we wanted. The Pirelli Scorpion K6 tyres were extremely effective and reliable from start to finish, giving me the confidence that I needed to go flat-out. One of the big strong points of the MINI is that it is extremely kind to tyres, and this meant that we were able to use the soft compound throughout the event. I really enjoyed driving the car: the turbo engine means that you can drive with the throttle all the time compared to a conventional Super 2000 car, where you are driving with the gears.” Navarra had no problems at all from start to finish, winning the first three stages to build up a lead that he was never to lose. Both the car and the tyres were perfectly reliable throughout the one-day event. The Italian driver beat the Skoda Fabia S2000 of Norway’s Andreas Mikkelsen by 12 seconds, which was also running on Pirelli tyres. Mikkelsen won the remaining six stages, using the harder Scorpion K4 tyre in the afternoon, meaning that Pirelli took a clean sweep of stage wins. Pirelli’s Motorsport Director Paul Hembery commented: “I’d like to congratulate both Andrea and MINI for a very important victory, marking what is sure to be the first of many successes for one of rallying’s most iconic brands. We’re delighted to be able to share in this first overall win, which has underlined the effectiveness of the MINI-Pirelli package. For just its third event, this was an extremely promising performance from the Super 2000 MINI and we look forward to supporting the car both at home in Italy and abroad in the future. Congratulations also to Andreas Mikkelsen, who put up a great fight on our tyres: I am sure he is going to be a real force on the Italian Gravel Championship this year.” For further information on Pirelli, please contact Anthony Peacock on anthony@mediatica.co.uk  or +44 (0) 7765 896 930.