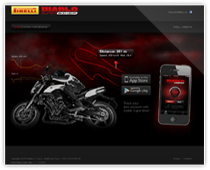 A new update is now available for the Diablo Super Biker app. With the new feature, routes registered with mobile devices can be downloaded and displayed directly on a computer or iPad, thus making it easier to see them in more detail and share them on social networks. Users who already have the application will see the update available directly on their device. Upon using the app for the first time, users will be required to supply data necessary for online access to the site http://www.pirelli.com/diablosuperbiker. Compared to that of a mobile device, a larger display will provide better visualization of routes shown on the site. Launched by Pirelli in August 2011, the Diablo Super Biker is the app for two-wheel lovers 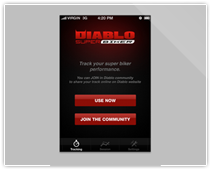 who want to measure their own performance on the track and on the street, in real-time. The app is available for download in 7 languages (English, French, German, Italian, Japanese, Portuguese and Spanish) from the Apple App Store and from Google Play for Android. The app is compatible with iPad, iPod Touch and iPhone (iPhone 4 for lean angle measurement) operating systems that have been updated to version 4.2 or greater and is compatible with Android OS-based devices. So far, the Pirelli app has registered more than 100,000 downloads, with an average of 328 downloads per day in the last two months. Similarly, the official Pirelli Moto Facebook ® page, launched in early 2012, has been steadily growing and currently has more than 140,000 fans who interact daily with Pirelli.