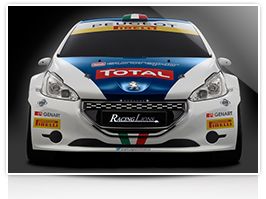 The Italian Rally Championship gets underway this weekend with the 37th Rally il Ciocco from 14-16 March, where the all-new Peugeot 208 T16 makes its international debut on Pirelli tyres. The Ciocco Rally is held entirely on asphalt, in the hills of Tuscany close to Lucca. At the wheel of the brand new car is six-time champion Paolo Andreucci, with Peugeot Italia and Pirelli looking to defend their fifth title together once more this season. Last year, the team switched to the much less powerful R2-specification 208 while the new R5 model was being prepared, but still managed to win the manufacturers’ championship with the help of Pirelli. In 2014, with an all-new car, the challenge and the excitement gets even greater. The Italian firm will bring the latest RX7 tyres for the Rally il Ciocco, which are designed to be particularly effective on slippery asphalt. The latest evolution of this pattern is the new RX7B for slippery asphalt, designed to offer a little more durability and grip in conditions that are typical of the Rally il Ciocco. For damp conditions the softer RX9 tyre will be used, with a compound better suited to lower temperatures. If it rains, the new soft-compound RE7A is available, with its unique tread pattern intended to disperse water and prevent aquaplaning without compromising roadholding. Other leading Pirelli entries include Andrea Perico, who finished third overall in the championship last year and was runner-up on the Rally il Ciocco, in a Peugeot 207 S2000. Andrea Nucita, Pirelli’s reigning Junior rally champion, also makes the step up to Peugeot 207 Super 2000 power this year with Pirelli. Having dominated all the classes in 2013, Pirelli once again equips all the Renault Clio R3s entered into the Production class and the Twingo R2s in the Junior class. Peugeot Italia’s Stefano Albertini will also be frontrunner for the Junior title in a Pirelli-equipped 208 R2, as he aims to build on Andreucci’s giant-killing performance in the same car last year. Andreucci, who has won the Ciocco event six times commented: “We tried the tyres with the 208 T16 on Tuesday for the first time before the rally, as everything is a bit last-minute this year because we only just got the car now. So it’s clear that we head into this rally with a few uncertainties, as is always the case with a new car, but I have to say that the tyres are not one of them. We had a very good feeling with them straight away, which gives me a lot of confidence. The way that the tyres work with this car is obviously a little different to how it was with the 207 S2000: the turbo gives different power characteristics but the adaptability of Pirelli tyres on all different types of car has always impressed me and I’m sure that will be the case again. Now we just need to work on the set-up of the car to make sure that everything is working together properly. The weather forecast for now is good, so we’re expecting consistent conditions, which should help us.” The Rally del Ciocco takes in slippery asphalt hill roads, which demand precision from the driver, car and tyres. The event gets underway with a ceremonial start on Friday from Forte dei Marmi. On Saturday the proper action begins with the first of 16 stages that make up a competitive distance of 150 kilometres in total. The rally is scheduled to finish at 12:45 on Sunday at Castelnuovo Garfagnana. Pirelli’s motorsport director Paul Hembery commented: “We feel privileged that the new Peugeot 208 T16 – which is set to be a very important car in rallying – will make its international debut on our tyres in the Italian Rally Championship, with Paolo Andreucci at the wheel. The Italian Rally Championship, as one of our home events, has always been extremely important to Pirelli and we look forward to defending our winning record in both the drivers’ and manufacturers’ championships.”