Certified by the authoritative independent body Motorrad TestCenter as the tyre with the highest mileage in its sgment, the most recent addition to the Pirelli family boasts a sports pedigree typical of Pirelli products and high performance on dry roads as well as wet for the entire life cycle of the product ·         Video of the press launch on Cavour aircraft carrier: http://youtu.be/O1FDc7_BuOc; ·         Technical video: http://youtu.be/YnTlqZIwnsI; 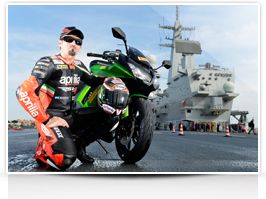 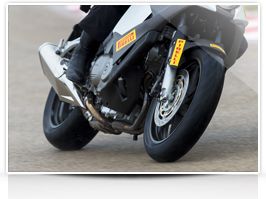 After the official unveiling for the international press last week on the flight deck of the Italian Navy's aircraft carrier Cavour and at the Nardò Technical Center, the new Pirelli sport touring tyre, Angel GT, is ready to hit the road and devour miles of asphalt with bikers everywhere, already boasting a first place achievement: in fact, the new Angel GT has been certified as number one for mileage in the Sport Touring segment and it is capable of guaranteeing Pirelli DNA in terms of performance, which is maintained at top levels for the tyre's entire life cycle. These characteristics are joined by typical Pirelli sport spirit and top notch performance on both dry and wet road surfaces thanks to an in depth study of the compounds as well as the geometry and positioning of the tread grooves. The Motorrad TestCenter test Angel GT is the best tyre for mileage in the Sport Touring segment. This was established and certified by the authoritative independent German body Motorrad TestCenter which conducted a test, comparing Pirelli with Michelin Pilot Road 3, Dunlop Sportmax Roadsmart II, Bridgestone Battlax BT 023, Continental RoadAttack2 and Metzeler Roadtec Z8 Interact M/O. For the test, held in Spain from 27 November to 14 December 2012, a set of 120/70 ZR17 and 180/55 ZR17 tyres were used as the standard and six Suzuki Bandit 1250 ABS bikes were used. The test was conducted on fast roads between Málaga, Algeciras, Jerez, Seville, Cordoba and Antequerra at an average speed of 120kph and on country and mountain roads with speed limits between 90 and 110kph between Marbella, Ronda, Algodonales, Ardales, Alora and Málaga. The test sessions were held in dry weather conditions with rather low temperatures, but consistent throughout the period. Due to the route that travelled through different altitudes (from 10 to 1100 metres above sea level) the air temperature varied from 18 to 5 degrees Celsius, while the asphalt temperature ranged from 18 to 23 degrees Celsius. At the end of the test the Angel GT was found to be the tyre with the highest mileage compared to the competitors in the Sport Touring segment. The design of the new Pirelli Angel GT tyre, the crowning jewel of the Milanese manufacturer's Sport Touring segment, was completely finalised through innovative developments of new tread, profile structure and compound combination concepts aimed at achieving the ambitious status of absolute segment reference in terms of mileage performance without altering the typical Pirelli sport DNA for the entire life cycle of the product and providing standard setting performance on both dry and wet surfaces. 100% Italian Gran Turismo 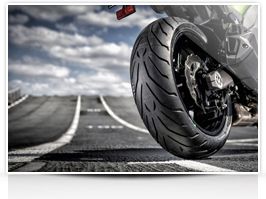 Angel GT is the crowning jewel of the Pirelli Sport Touring range and the natural descendant of Angel ST, a tyre with multiple victories under its belt in comparison tests conducted by the most prestigious international motorcycling magazines, as well as holder of 7 duration world records. Compared to its predecessor, Angel GT increases mileage by 30%, reduces the braking distance by about 1 metre (at a speed of 75 kph), also improving grip and handling in the wet, and, even more importantly, manages to maintain these characteristics at a high level over time. And so, with the name it chose for this product Pirelli decided to maintain a clear connection to the winning tyre, highlighting the evolution toward a product dedicated to long distances which maintains the typical sport spirit of Pirelli with the abbreviation GT. This is why Angel GT is 100% Italian Gran Turismo, an ideal tyre for those riders who travel long distances with a passenger and the bike fully loaded, or who simply take a ride in the country, but also for those who use their bikes all year round, both for recreation and commuting. All of this is true no matter what bike is used, whether a touring bike, a street enduro, naked or sport bike. So Pirelli engineers managed to obtain standard-setting mileage in the segment combined with performance typical of a sport product but, what's more, the unique feature of the Angel GT that sets it apart from the other products in the segment lies in the fact that the characteristics it boasts have limited degradation as kilometres roll by all the way to the end of the product's life cycle. This is a property that Pirelli sums up as “Performance Mileage”. The tread design The Angel GT tread is a clear evolution of the Angel ST tread in technological terms because it was designed for the primary purpose of providing reduced and more regular wear and improved water drainage guaranteed by both the front tyre and by the new arrangement of the grooves on the rear tyre. To provide optimum wear, the grooves were directed following the theory of Schallamach wear waves which describes the mechanics of a wear crest forming on the tyre depending on the amount and direction of the forces exchanged between the tyre and asphalt at each point of the profile. The arrangement and direction of the grooves were also studied in order to optimise water drainage and they allow a 10% reduction on the front and 16% reduction on the rear of the void/fill which translates into a larger surface of compound in contact with the ground and therefore better grip and better wear. From a purely aesthetic point of view, the design is also neater and clearer. Unlike the Angel ST, the new Angel GT tread does not change its design with use, a testament to the fact that its performance remains essentially unaltered for the entire life cycle of the tyre. Profile 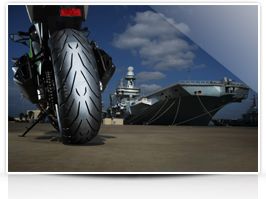 The target of increasing mileage, which cannot be achieved working only on the tread, took into maximum consideration the absolute need not to compromise grip levels needed to maintain performance and safety supremacy in any conditions of use. This is why the Pirelli Research and Development centre focused its efforts on achieving this improvement by also, and above all, designing a completely innovative profile. Whilst maintaining the Pirelli philosophy based on a design with variable radius curvature, we worked on increasing the central radius by about 35% in order to create a less rounded central section. This way both the size and the proportion of the ground contact area were significantly modified, now 6% shorter and 15% wider compared to its Angel ST predecessor. Generally speaking, a compound's wear is caused by the sliding which occurs when it exits the surface area while the tyre rolls on the asphalt. This is why the size and shape of the contact area with the asphalt have a direct impact on compound wear. A shorter contact area means less overheating, less sliding and therefore less wear of the compound itself. At the same time, a 15% increase in width means being able to distribute wear over a larger portion of tread with an advantage for both final performance and more regular wear. By combining this technical solution with a specifically designed compound, Pirelli engineers were able to increase the mileage of the Angel GT by about 30% compared to the Angel ST. A further benefit which stems from the profile lies in the fact that the contact area has a linear variation in its proportions between upright and fully leaned over bike, with the result of having a variable progression in tyre performance which provides the rider with a sensation of riding confidence and more agile and direct bike performance. Structure To adequately support the innovations made in terms of profile and larger road contact surface as well as guaranteeing a comfortable and pleasant ride, with the Angel GT tyre a new rayon carcass was introduced which stems directly from the know how acquired by Pirelli in racing, particularly in the FIM World Superbike Championship. The new carcass has 32% more linear density with 60% higher rigidity compared to the Angel ST tyre and at the same time it allows for an agile and direct ride, high push and grip in turns and excellent damping capacity on bumpy asphalt. It also guarantees that the initial performance of the new tyre will stay consistent for the entire life cycle of the product. Compounds Thanks to a tread contact area designed to improve mileage and to the benefits provided by the innovative profile and new structure which decrease the stress the compounds are subjected to, Pirelli engineers were able to decisively rethink the compound choices and the overall general philosophy for their application with respect to the Angel ST predecessor, achieving technical solutions which had been difficult to realise until now. In fact, the Angel GT set is comprised of a rear made of a dual blend compound with cap&base technology, that is, a technology which allows the compactness and stability of the product to be improved using a compound intended to provide grip in the part in contact with the asphalt and a compound which guarantees stability on the lower layer, matched with a single blend on the front which uses a 100% silica formula derived from the one used on the shoulders of the rear tyre in order to provide similar performance, especially in leans and on wet roads. The sophisticated construction of the rear, in addition to the cap&base application, provided a central part of the tread of about 45 millimetres in width (sizes vary slightly depending on the tyre size) created expressly to ensure extremely high stability at any level of load and use as well as greater resistance to abrasion and a high level of grip on wet roads both in acceleration and braking thanks to a silica concentration higher than 50% with a balanced proportion of carbon black and resins. The shoulder compound, similar to the one on the entire front strip, is 100% silica capable of providing excellent grip on dry and wet surfaces thanks in part to the use of controlled microstructure polymers that improve filler dispersion and interaction between the polymers themselves and filler. Particular care was taken in selecting these components in order to best harmonise the combination of the two compounds used and the revolutionary mixing process. In fact, the new compounds use innovative materials which unleash maximum potential if they are processed with a continuous mixing process, that is, a procedure which takes into consideration not only the volume of the ingredients used, but also the order in which they enter the flow. Last but not least, the front tyre is also 100% silica, with a formula derived from the one used on the shoulders of the rear tyre in order to provide extremely high performance on both dry and wet surfaces and in braking. Personalisation In addition to the technological specifications described above, the new Angel GT motorcycle tyre range, following the personalisation characteristics typical of the latest top range Pirelli products, has a dedicated area on the side of the front and rear tyre where a special personalised label can be applied, created and purchased directly from the Pirelli website www.pirellimoto.com . The on-line tool allows the user to personalise a label choosing from various fonts, colours, flags, the layouts of the most famous international circuits and many other logos. The label is then sent directly to the user's address with a special adhesive resin designed specifically for application on the tyres. Available sizes The new Angel GT is already available for purchase on the Pirelli international sales network in the following sizes: Untitled Document