The new benchmark for Sport Touring tyres, the Pirelli Angel GT, has today been named Motorcycle News ‘Tyre of the Year’. The MCN Best Tyre Award, unlike those for Best Motorcycle in each type of market segment, offers just one overall winner, making this Sports Touring tyre’s accolade even more impressive. 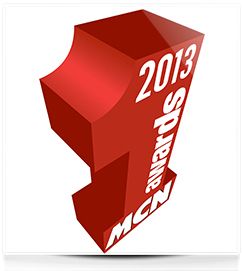 Motorcycle News Senior Road Tester Michael Neeves explained, “The Pirelli Angel GT has proved itself to be an excellent all-round sports touring tyre, for all types of bikes. It performs like a sports tyre and you could even use it on a sportsbike at a trackday, but it’s long-lasting, stable and grippy in the wet.” Pirelli UK Product and Marketing Manager Jim Worland commented; “This important industry accolade really caps a fantastic year for the Angel GT tyre. Launched on the deck of an aircraft carrier in Italy this tyre made an impact immediately. However away from that glitz and glamour the tyres have attracted such praise from the tyre dealer network, press and crucially, riders. To offer such high levels of grip and handling  and to come first in the Motorrad Test Center’s meticulous mileage benchmarking makes this such an impressive tyre, factors which I’m sure have cemented it’s place for this award.” The new tyre, launched in April, has become an instant hit due its diverse appeal thanks to class leading mileage, high safety feeling in the wet and the Pirelli sporty DNA, all contributing factors to its MCN Award. Earlier this year the tyre was certified as the Sports Touring tyre with the highest mileage by the authoritative, independent Motorrad Testcenter in Germany. The tyre was compared with Michelin Pilot Road 3, Dunlop Sportmax Roadsmart II, Bridgestone Battlax BT 023, Continental Road Attack2 and Metzeler Roadtec Z8 Interact M/O.

The Angel GT was launched to the World’s media on the deck of Europe’s largest aircraft carrier and was extensively tested at the Nardo handling track in Southern Italy. What impressed many was its outright grip and performance at this test, especially from a tyre with such high durability in the all important Sports Touring segment. These dual attributes are why the tyre is denoted Gran Turismo. Promoted heavily at the eni FIM Superbike World Championship and at MCE British Superbike Championship as the road tyre to ride to the races throughout 2013, the tyre was also nominated best in it’s class by Moto Journal, Moto Magazine, PS Das Sport and Motorrad Magazin.