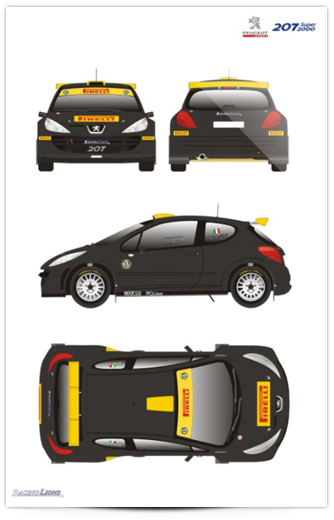 Pirelli has joined forces with the CSAI – the governing body of Italian motorsport – and the Pirelli-equipped Racing Lions team, to offer a young driver the opportunity of a lifetime. Under this latest scheme a young driver aged 28 or under will be given the chance to compete in four rallies on the 2012 Italian Rally Championship with a factory car: a unique opportunity to get noticed at the top level with the best possible equipment. The young driver selected is 25-year-old Stefano Albertini, the winner of the Italian Junior Rally Championship and the Renault Trophy with Pirelli in 2010. Together with co-driver Simone Scattolin, he will drive a Peugeot 207 S2000 on the Rally Mille Miglia, the Rally Adriatico, the Rally San Crispino and the Rally San Martino di Castrozza. The car will run in a black livery with bespoke Pirelli branding. Albertini said: “Since I started rallying in 2007 I have always been with Pirelli – I’ve never driven a rally on another tyre – because I’ve always had a very good feeling with the products, both on the wet and on the dry. I’m absolutely delighted by this amazing opportunity and I fully intend to make the most of it although I know that it will not be easy, as I don’t know the car at all and there are some very experienced drivers that I will be up against. However, I think the high level of competition in the Junior Championship has prepared me well for the challenge that lies ahead. At the moment, it’s very hard for any young driver to be able to make the next step in our sport, which is why I feel incredibly grateful for this brilliant prize and very honoured to receive it.” Pirelli’s motorsport director Paul Hembery commented: “At Pirelli, we believe firmly in supporting young talent, which is why we have always put our weight behind initiatives such as the Pirelli Star Driver scheme and the WRC Academy on the World Rally Championship. In racing, we supply the GP2 and GP3 series, which are the official feeder championships to Formula One. Now, in collaboration with the CSAI and Racing Lions, we are delighted to welcome this latest programme that gives a talented young Italian driver from our junior championships the chance to take the next step. I’d like to congratulate Stefano and Simone on this important award, and I wish them every success in the future, as ambassadors for the next generation of rally drivers and for Pirelli. We’d like to thank our friends at the CSAI and ACI Sport – Angelo Sticchi Damiani, Marco Ferrari and Marco Rogano, with whom we enjoy a fantastic collaboration – for making this possible.” The all-asphalt Mille Miglia Rally – one of the most famous names in Italian motorsport – takes place in Brescia from April 19-21. Albertini, along with his multiple champion team mate Paolo Andreucci, will use Pirelli’s well-known range of RX asphalt tyres on the event. Albertini will complete a short test prior to the start of the event. ENDS For further information and photographs please contact: Anthony Peacock +44 7765 896930 anthony@mediatica.co.uk Internet: www.pirelli.com Twitter: @Pirelli_Media, @paulhembery Facebook: www.facebook.com/Pirelli