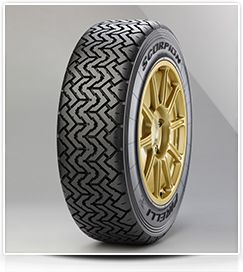 Pirelli’s famous Scorpion gravel tyres return to the top level of the World Rally Championship for the first time in four years next weekend on Rally Mexico, round three of the global series. Mexico is the highest and one of the hottest rounds of the WRC, based around the country’s leather capital of Leon. Pirelli will bring the hard compound Scorpion XR5 tyre and the soft compound XR7. The XR pattern is designed for the harshest road conditions in the world, which feature particularly abrasive and aggressive surfaces. The internal structure means that the tyre is particularly resistant to rocks and other impacts: a constant feature of Rally Mexico. The sidewall has also been the focus of attention during development of the XR, with extra reinforcement guarding against cuts that can cause punctures. The new XR is a symmetrical (non-directional) tyre, which makes each tyre interchangeable on either side of the car. The unique construction means that it works well both on hard surfaces and on loose gravel, allowing the use of sophisticated new materials in the compound that deform with the road surface to ensure optimal levels of grip even in marginal conditions. The tread blocks on the XR are designed to increase resistance to wear and ensure excellent stability, particularly at high speed and in high temperatures. Since completing its exclusive tyre supply agreement with the WRC from 2008-2010, Pirelli has continued to intensively develop the XR tyre – resulting in the latest evolution that makes its debut on Rally Mexico, with added strength and sophistication. On only the third event of its WRC comeback – and the first long-haul rally – Pirelli will supply six customers. Max Rendina, the Production Car Cup winner in Monte Carlo with Pirelli, will drive a Ralliart Italia Mitsubishi Lancer, while another Mitsubishi is driven by Paraguay’s Augusto Bestard. Lorenzo Bertelli (second in WRC2 in Monte Carlo with Pirelli) will compete in a Ford Fiesta R5. Other Pirelli customers are Gianluca Linari (Subaru Impreza WRX), Jorge Martinez (Subaru Impreza STI) and Ricardo Cordero (Mitsubishi Lancer Evo X). The qualities of strength, performance and durability of tyres are tested even more this year, under the latest WRC regulations that reduce tyre usage on the majority events. Just one compound is nominated per gravel event (the hard compound in Mexico) with limited quantities of a softer compound also available in case of unexpected weather. Drivers are allowed to select from a total of 40 tyres in Mexico but can use a maximum of 20 for the 22-stage rally, plus four for pre-event shakedown. The XR5 is the prime nomination, with the softer XR7 compound, suitable for use in cooler conditions, available as the option. Only four new tyres are allowed this year at every tyre-change opportunity and there are five opportunities in 2014 compared to six the previous year. This means that the tyres need to be even more resistant than they were in previous years, without compromising the speed delivered by the latest generation of World Rally Cars. This philosophy of more performance with greater durability may seem incompatible, but it lies at the very heart of all of Pirelli’s road car products. Pirelli’s senior tyre engineer Matteo Braga said: “Mexico, with its high temperatures and high altitudes, presents a very tough challenge for any tyre, but we are confident of the abilities of the Scorpion XR to cope with the rocks and heat. With the cars losing up to 20 per cent of their engine power due to the altitude, this actually has an effect on the tyres, because although there is less power the cars can slide more if they do not have enough traction. The current XR is a very different concept to the tyre that was last seen in 2010, with new dimensions and a new non-directional pattern, making use of all our latest technology. It has been specifically created to respond to the needs of the most recent FIA regulations, so we are all looking forward to seeing it perform in competition.” Rally Mexico takes place from March 6-9 and covers a competitive distance of 399.93 kilometres on mainly gravel roads.