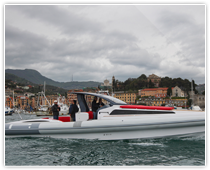 The 43rd running of the 2012 Pirelli Regatta - Carlo Negri Cup took place in Santa Margherita Ligure, Italy at the beginning of May. The competition is run in memory of Carlo Negri. The son of Margherita Pirelli and Rinaldo Negri was one of the heroes of the Italian Air Force during the Second World War. The cup named after him was devised in 1945 by the president of the Italian Yacht Club, Beppe Croce, to commemorate his friend, a war victim after volunteering for a mission in Albania in 1943. This year, the perpetual challenge trophy attracted 102 entries and also provided the opportunity to introduce the new Pirelli PZero™ 1400 Cabin rigid inflatable boat launched by Pirelli brand licensee Tecnorib. The design features meticulously chosen materials, close attention to detail and very high performance. The roominess, flowing lines and top-quality finishing set this punchy craft apart from its rivals. Like for the rest of the range, sophisticated finishes and details are available: aerodynamic windscreen, T-top and three seats in the steering area, plenty of space in both bow and stern sections with teak panelling. The result is a perfect blend of design and technology: two 370 HP diesel engines, racing performance offering a top speed of 45 knots and a cruising speed of 32 knots.