This year, the GP2 Series benefits from new tyre rules designed to mirror those in Formula One, with drivers having a choice of a softer and a harder compound for the first time. On the fast and abrasive Sepang circuit, the drivers had the P Zero medium and the hard compounds at their disposal: just as is the case in Formula One. Unlike Formula One though, they are not obliged to use both compounds during the race, as they have only one set of the softer compound available to them, as well as three sets of the harder rubber. 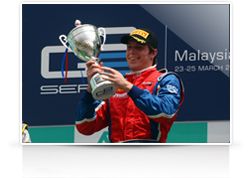 The new regulations added an extra element to the opening GP2 race in Malaysia, the first round of the year, with the drivers forced to make the tyre decisions that will become a constant element if they make it through to Formula One. The first race, which took place over 30 laps on Saturday morning before Formula One qualifying, was won by Arden International’s Luis Razia from Brazil. Razia qualified second on the grid, but was able to get past pole-sitter Davide Valsecchi at the start, who nonetheless set the fastest lap on lap 24 using the hard tyre. The first GP2 race includes a compulsory pit stop, and Razia chose to use the hard tyre twice: a strategy that meant he could get away with just changing the rear wheels, as there was sufficient life left in the fronts for him to complete the race. Valsecchi started on the medium tyre and then changed to the hard tyre on lap 12. Of the 23 drivers who finished the race, seven used a medium-hard strategy, five used a hard-medium strategy and 11 used a hard-hard strategy. Of the seven drivers who adopted a medium-hard strategy, four finished in the top eight. There was a dramatic finish to the race when rain was announced with just four laps to go, prompting the teams to prepare Pirelli’s GP2 rain tyres, complete with their distinctive blue markings, for action. In the end though, they were not needed and Razia went on to win by 7.8 seconds from Valsecchi. Eighth place for James Calado, the winner of Pirelli’s GP2 scholarship prize last year in Abu Dhabi, meant that he started race two from pole position. Calado went on to win race two, which was a 22-lap sprint using the hard tyres on Sunday morning, with no pit stops. The Englishman led from pole and claimed victory from his Lotus team mate Esteban Gutierrez: Pirelli’s inaugural GP3 Champion in 2010. Brazilian Felipe Nasr was the second rookie on the podium to finish third, just ahead of Caterham’s Giedo van der Garde, who climbed up from ninth on the grid. Fifth place for Razia in race two was enough to ensure that he leads the championship after the opening two races. In the rising track temperatures, looking after the rear tyres was the key to controlling degradation, in order to ensure that they were still in good condition for the final race to the flag. Once more there was a threat of rain in the closing stages, which proved to be a false alarm. Pirelli’s racing manager Mario Isola commented: “In the first race, with the compulsory pit stops, we saw a wide variety of strategies that underlined how the introduction of a tyre choice has brought an extra element of interest to the racing. The drivers had to consider not only how their tyres would perform on the track, but also which choice would be quickest during the pit stops, with Razia’s decision to use the hard tyres twice – and therefore save on a front-tyre change – enabling him to make only a short stop, and go on to claim victory. Most drivers did not find a big difference in degradation between the two compounds in the first race, but degradation was certainly an issue in race two, with the drivers having to look after their tyres in order to ensure a consistent performance.” This year marks the longest ever GP2 season, with 12 rounds and 24 races. The next round of the Pirelli-equipped series takes place in Bahrain from April 20-22. Follow us on Twitter @ Pirelli_Media or Facebook on www.facebook.com/Pirelli For further information please contact Alexandra Schieren         +33 607 03 69 03     alexandra.schieren@pirelli.com Anthony Peacock                       +44 7765 896 930    anthony@mediatica.co.uk ** Francescopaolo Tarallo    +39 334 684 4307    francescopaolo.tarallo@pirelli.com (Head of Product and Motorsport Communications)