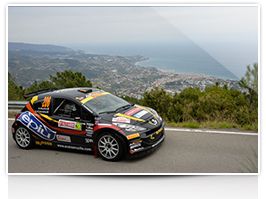 Reigning Italian Production Car Champion and former Italian Junior Champion Andrea Nucita – who won both of his titles with Pirelli – has clinched his best-ever career result on one of the most legendary rallies in Italy: Sanremo, where he drove a privateer Pirelli-equipped Peugeot 207 S2000. The Italian, co-driven by Giuseppe Princiotto, finished second after two days of action.

This was only the 24-year-old’s second outing in the top category, having retired from the first round of the Italian Rally Championship two weeks ago. Despite his inexperience and some challenging conditions on the opening day, the Sicilian did not put a wheel wrong, finishing runne-up only to reigning Italian champion Umberto Scandola, who also clinched his 2013 drivers’ title on Pirelli tyres.

For Sanremo, which uses mountain roads with variable grip above the Ligurian seaside resort, the Pirelli drivers had the new RK tyres at their disposal: also available in smaller sizes for the first time. The RK tyre has just one pattern for both dry and wet asphalt, in accordance with the latest FIA regulations, making them the most versatile rally tyres that Pirelli has ever produce, with plenty of technology that is directly relevant to road cars.

As well as challenging road conditions, Sanremo is well known for its changeable weather, due to its coastal location on the seafront. In wet and dry conditions, multiple Italian champion Paolo Andreucci won the opening stage in the brand new Peugeot 208 T16: only the second time that the car has run on Pirelli tyres. Unfortunately he was subsequently forced to retire with a technical problem.

Nucita commented: “I’m delighted with this result, which is the best of my career. To do it on such a famous rally as Sanremo makes it even more satisfying. I actually felt that I was pushing less than I did on the last round at the Ciocco Rally, because I really wanted to finish. There’s no doubt that the Pirelli tyres played an important part in this result, giving me the confidence to push hard even though it was only my second rally in this car.”

Pirelli also won the historic section of the Sanremo Rally, thanks to Massimo Pedretti in a Lancia 037, which won the world title for manufacturers in 1983. The Group B machine was fitted with Pirelli’s P7 Corsa Classic tyres, which has a single pattern for both wet and dry asphalt, just like the RK. Although the 037 can develop in excess of 300 horsepower, the Corsa Classic is designed to help make the car manageable even for gentlemen drivers.

The next round of the Italian Rally Championship is the famous Targa Florio, which finishes on May 11 in Sicily. Ends For more information about Pirelli, please contact Anthony Peacock on +44 (0)7765 896 930 or anthony@mediaticaworld.com