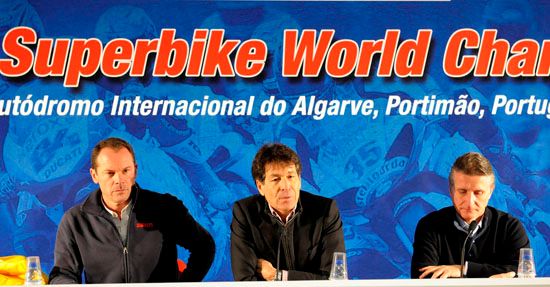 Said Paolo Flammini of the 2011 championship, “Many strong entries are evident on the WSBK and Supersport World Championship grids this year with 21 and 29 Permanent riders respectively, and one key focus of late has been to get younger riders involved in all classes. Career progression for young riders has been a characteristic of the last seven years of the Superstock-Supersport-Superbike format, with riders like James Toseland, Chris Vermeulen and Michel Fabrizio being the early benefactors of what has become a nursery of talent developed from within the WSBK paddock itself. Kenan Sofuoglu, Jonathan Rea, Ayrton Badovini, Lorenzo Lanzi, Florian Marino, Gino Rea, Maxime Berger and Joan Lascorz are all at some level within this talent-spotting system.” “The Superstock and Superbike areas have two different functions,” explained Flammini. “Stock is a category for youngsters who are beginning to race, while Superbike and Supersport are categories where the manufacturer-based teams can race. The new Ninja Cup, which will take place in six of the European rounds, highlights this ladder of progression even more to bring youngsters into the system and we can now go and take talent from even ‘lower’ down the career ladder, so to speak.” On the subject of age limits for the Superstock classes, Mr Flammini said. “The age limits present in 600 and 1000 STK classes have been made more generous for two main reasons. The first is that 40 year olds can now become world champions, so why stop a 24-year-old from racing? The second is that many European countries have made it impossible for youngsters to have a license to ride a 600cc Supersport bike on the road.” On the TV front, Mr Flammini also underlined that some of the series’ main initiatives for 2011, on-board cameras, 3D graphics and enhanced HD TV coverage, will help to bring the all-action WSBK champion even closer to the worldwide TV audience. Giorgio Barbier, Racing Activities Manager, Pirelli Moto, which enters into its eighth season as official one-make tyre supplier, said: “The development of the various categories is one of the aims of an international championship like this. For this reason the strategy of Infront, the FIM, the Manufacturers and Pirelli is to allow new talent to emerge through these categories; a perfect example of this is that two of the best Supersport riders in 2010 (Laverty and Lascorz) and the best two Superstock 1000 riders (Badovini and Berger) are now going to race in WSBK. In addition World Supersport will see racing riders from 16 different countries and that makes this the most international championship ever. Pirelli will also develop two new tyre sizes for both the Supersport and Superstock 1000 classes, and we shall extend the Best Lap race award to both Superstock classes. And finally at the last round, here in Portimao, we shall invite the three best National Superstock 600 riders from UK, Spain, France, Germany and Italy to participate in an European Pirelli Superstock series final. All of this is because the present of these categories is the future of SBK as well.”

The 24th season of World Superbike action gets underway at Phillip Island from February 25-27, with the final official testing session being held at the same circuit on February 21-22.