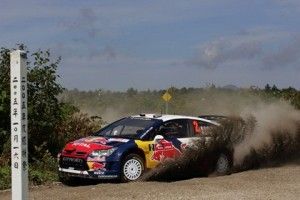 In terms of difficulty, world championship rallies don’t get much harder than Rally Japan. With its blend of fast, sweeping gravel roads and narrow and technical sections, the event requires plenty of skill and experience to master. Although the threat of rain that had been forecast in the build-up to the event subsided, the surface on the bulk of the stages quickly deteriorated and became coated in small rocks and sharp stones. And while there was no rain, the gravel roads remained damp under tree cover, which made for an inconsistent stage surface with both slippery sections and areas of good grip. Ruts also formed because of the effect of tyres digging into the soft gravel, which made it difficult for drivers to keep their cars on the optimum line. Sebastien Ogier, who secured his second win at WRC level in Japan on Pirelli’s soft-compound Scorpion tyre, had plenty of skill but no prior experience of the demanding stages on the island of Hokkaido when he took the start in Sapporo on Thursday evening. It made the 26-year-old’s triumph even more impressive. “I’m very happy because this is my first time in Japan and I did not expect to take the victory, so it’s really amazing,” said the factory Citroen driver. “Very quickly we found a good rhythm and confidence in the car, which was perfect all rally. I was very happy with my drives in Portugal, where I also won, and in Finland but this weekend was different because I had to be more strategic. I didn’t know the stages, so on the first two days I had to be careful but today, when they were new for every driver, I had a big push and it worked very well for me. As usual we had no problems with our Pirelli tyres because they are very strong and gave a good performance.” Matteo Braga, Pirelli’s senior WRC tyre engineer, said: “The wear rate of the tyres was very low on Friday and we saw a lot of tyres coming back to service looking almost new, even though the ground temperature was 33 degrees centigrade. That’s obviously a good thing because it means the performance of the soft compound tyre stayed consistent. On Saturday there were lots of sharp stones on the stages, which can easily cut the tread, but there wasn’t any significant damage caused to the tyres because of this and that is very satisfying. “Overall, this has been another very successful rally for Pirelli and I am pleased to say that only 770 tyres were required by our 55 crews because the wear rate was so low with no tyre failures. Some privateer crews used 12 tyres for the entire 303 competitive kilometres, while one driver used just six tyres.” Indeed, works Ford driver Mikko Hirvonen, who had been in the thick of the lead battle until a technical fault dropped him back on the final morning, used just four tyres over Sunday’s eight stages after electing not to use the spare tyre, which the WRC’s technical regulations require him to carry, due to the consistent and durable nature of the rubber. Despite the punishing stage conditions, Pirelli’s Scorpion tyre, which uses a reinforced sidewall to counter the threat of deflations, proved extremely resilient. Even the damaged right-rear tyre that Petter Solberg suffered on stage four after clouting a bank was re-inflated by Pirelli’s engineers when it was returned to the service park in Sapporo owing to the fact that the loss of air was caused by a damaged wheel rather than a puncture, although the incident caused the 2003 world champion very little time loss. Solberg, who captured the first of Pirelli’s four wins on Rally Japan back in 2004, took second in his privately-run Citroen with Jari-Matti Latvala third for Ford after a thrilling final day, which began with the top four crews covered by 15 seconds. As well as supplying its Scorpion tyre to the main WRC field as part of a three-year agreement with motorsport’s world governing body, the FIA, runners in the Super 2000 World Rally Championship and Production Car World Rally Championship also use Pirelli covers as standard, thereby underlining the performance and efficiency of the Italian rubber on a wide range of machinery. Jari Ketomaa, who is contesting the SWRC with support from Pirelli as his prize for winning the Finnish championship in 2009, took top honours in the class for normally-aspirated two-litre cars at the wheel of a Ford Fiesta S2000, and Patrik Flodin claimed victory in the PWRC. While Flodin proved unstoppable in his Subaru Impreza, another notable performance came from Hayden Paddon, who was competing in Japan for the first time. Paddon, from New Zealand, is one of five drivers contesting six rounds of the WRC this season as part of the Pirelli Star Driver training programme. Driving a Mitsubishi Lancer, Paddon took second in the showroom class. Up next on the World Rally Championship schedule is Rallye de France from September 30-October 3. The all-asphalt event, which is based in Strasbourg in the Alsace region of the country, concludes with a stage in Sebastien Loeb’s home town of Haguenau, where victory for the Citroen driver would make him world champion for a seventh time.
Newsroom