Opening of the 2013 Motorsport season at Pirelli headquarters 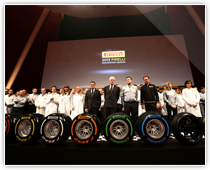 More than 250 championships, less than half of which are single-tyre events, requiring design, manufacture and distribution of 720,000 racing tyres in more than 40 countries around the world, from the Americas to the Far East. Pirelli is once again fully committed to the Motorsport season that was launched at its Milan headquarters on the 23rd January. Strategies, programmes and new tyres were presented by Pirelli Chairman and CEO, Marco Tronchetti Provera, Motorsport Director, Paul Hembery and Motorbike Motorsport Director, Giorgio Barbier. . The meeting also allowed time to introduce the new Pirelli brand Ambassador, Jean Alesi. “I am once again a 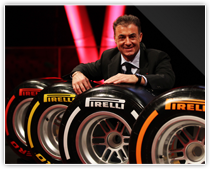 member of the great Pirelli family”, advised the former French F1™ driver, “I used this great company’s tyres when I was a Tyrrell driver”. The technology and innovation under constant development in Pirelli laboratories for car and motorcycle championships all around the world are transferred by researchers to the production of road tyres. An expertise also highlighted by Chairman, Marco Tronchetti Provera: “We are happy to continue with our commitment to racing, because it is actually thanks to the high technology needed for the races that we can develop and market products offering increasingly higher performance”. . The highlight of the event was the unveiling of the new F1™ and Superbike tyres. And it is indeed the Formula One™ tyres that Marco Tronchetti Provera takes as an example of a breeding ground for innovation: “The F1™ Teams asked us for more solutions and more entertainment. We have given them what they wanted. And we fully expect to remain in this most illustrious of championships for a very long time as we find it a stimulating challenge. We believe in everything that creates excitement, enthusiasm, high performance and technology”.

Opening of the 2013 Motorsport season at Pirelli headquarters
Newsroom