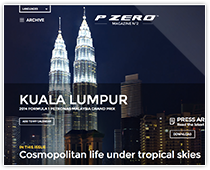 P Zero Magazine is the new online editorial project by Pirelli dedicated to Formula One™. It has been conceived to provide a Pirelli point of view on each Grand Prix™ and catch the interest of a broader audience. It not only focusses on races and technical aspects, but also provides information on the cities, the tracks, the Pirelli team, stories from historical races, beautiful photo galleries, rarities and content dedicated to Pirelli’s premium positioning. In each issue the P Zero Magazine features: “The city”, a description and a photo gallery of the host city of the Grand Prix™ told by someone who knows it well; “Life Style”, a column exploring trends, flavours and facts related to the city and the surroundings; a 3D animated video describing the circuit from a tyre’s point of view; Jean Alesi’s comments on the upcoming race; “The way we were”, a look back at the best pictures and anectodes from past races; the infographics with the most interesting stats from the circuit (pre and post race); “From race to road”, an article exploring the technological innovation and commitment constantly carried out by Pirelli; a photo gallery live from the Grand Prix™; the cartoon featuring Paul Hembery and Mario Isola; a recipe from the Pirelli Motorhome; a series of columns providing facts and statistics from the Grand Prix™ and the Paddock; up-to-date Driver and Team standings. With coverage of the whole 2014 Fia Formula One World Championship™, the project will give life to 19 articles throughout the year, 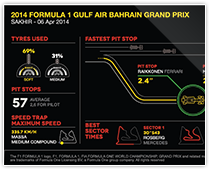 from Melbourne to Abu Dhabi. The website, fully accessible for tablets, is available in many languages including Italian, English, German, Chinese, Russian and soon in Swedish. http://magazine.pzero.com