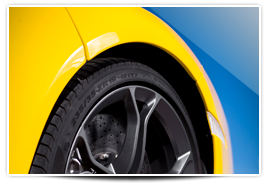 As McLaren’s sole tyre supplier and technical partner, Pirelli has developed bespoke versions of the P Zero and P Zero Corsa on the new MP4-12C for road and track use respectively. The performance of this "dedicated" tyre were tested last week on the Ascari circuit, near Ronda (Spain), during the presentation of the new supercar. The P Zero tyres for McLaren are the result of close collaboration between Pirelli’s researchers and McLaren’s engineers at Woking, with the dual objective of harnessing all the power of the new car while ensuring total control. At the heart of the project is the complete integration of the tyre design with the MP4-12C’s construction architecture and electronic technology – the most advanced currently available in the automotive sector – in order to make the P Zero tyres a fundamental component of the car. The perfect harmony between car and tyre guarantees driving pleasure and precision, an immediate response under a variety of different forces and an instant reaction to changes in aerodynamic loads and set-up, no matter what the conditions of usage. Thanks to the experience gained by Pirelli in Formula One as well as other high-profile motorsport championships, Pirelli’s engineers developed tyres in record time that are capable of meeting the needs of three distinctive characteristics that define the new MP4-12C: -  A high power output, generated by the twin-turbo engine, which requires a tyre capable of laying the torque down in a progressive and consistent way. -  A high-performance suspension system specifically designed for the tyre. Once more, the experience gained in Formula One was essential, as in grand prix cars the tyres form a vital part of the suspension. In exactly the same way, the suspension settings of the new McLaren MP4-12C have been based precisely on the characteristics of the P Zero and P Zero Corsa. -  A high power-to-weight ratio, plus varying aerodynamic downforce loads, which require a tyre that can generate maximum grip and traction under any circumstances. 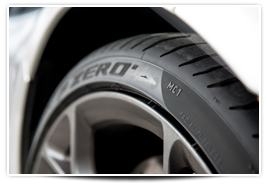 Pirelli’s development work with the bespoke McLaren tyres concentrated on both the structure and compound. The objective for the tyre structure was to ensure flexibility and grip, while at the same time guaranteeing enough rigidity to cope with high aerodynamic loads. In order to be sure of this versatility, the structure of the front and rear tyres have been developed individually to respond to the different demands placed on them. For this reason the front tyres have a rounded profile while the rears are squarer. The work carried out on the construction obviously has an important effect on the compounds, which have been designed to warm-up quickly and complement the whole tyre’s rapid reaction to direction changes, while providing consistently high levels of grip. The nanotechnology used by Pirelli in the design of these tyres allowed the Italian firm to develop ‘intelligent compounds’, which react instantly to adapt themselves to the varying forces acting on the car at any given time. These compounds make full use of Pirelli’s CCM technology (Continuous Compound Mixing) during their production, to ensure complete precision in the compound mix. Pirelli’s engineers also made use of cutting-edge virtual modelling technology while developing the P Zero and P Zero Corsa for McLaren, in order to collect data and simulate the different usage and stress levels that the tyres are subjected to under different circumstances. THE PIRELLI P ZERO FAMILY The specialised P Zero and P Zero Corsa tyres developed for the MP4-12C are based on the standard P Zero and P Zero Corsa models: Pirelli’s range-topping Ultra High Performance tyres. Launched in 2007, P Zero is Pirelli’s iconic Ultra High Performance tyre. High safety standards and reduced braking distances, together with enhanced roadholding and perfect comfort, are the tyre’s defining characteristics. Special nano-composites in the compounds and bead ensure a comfortable drive allied with sporting performance. The three wide longitudinal grooves on the tread pattern guarantee maximum grip in the wet and reduced noise levels. The structure guards against any deformation in the tyre even at speeds of up to 370kph. P Zero is available in 130 versions, in /50 to /25 sizes, for 17 to 21 inch rims. P Zero Corsa System is the most sporting product in Pirelli’s range, suitable for use on the road and on the race circuit as well. It provides maximum performance and perfect safety both in the wet and in the dry, thanks to its directional precision and roadholding through corners. The tyre’s original development began in 2003: seven years later Pirelli launched the P Zero Corsa System, which combined the P Zero Corsa asymmetric tyre with an evolution of the preceding directional tyre. These two different tread patterns – directional on the front and asymmetric on the back – help to delay the onset of aquaplaning even in extreme conditions. P Zero Corsa System is available in 23 sizes for 18, 19 and 20-inch rims.