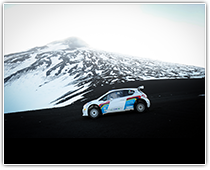 A new exciting chapter of the “impossible challenges” of Paolo Andreucci and Peugeot.  The most successful driver of the Italian Rally Championship has climbed with his Peugeot 208 T16 on Pirelli tyres the top of Mount Etna.  After the breath-taking challenge with Anna Andreucci on mount Zoncolan, driving the 207 Super 2000 and that with Italian Downhill champion Sunding, driving the RCZ, Andreucci has climbed to the top of Europe’s highest active volcano. Meanwhile, Peugeot Italia and Pirelli have started together a new exciting adventure: the new CIR season. Last year, the Peugeot 208 T16 equipped by Pirelli made a successful debut, winning four out of eight rounds of the Italian Rally Championship (Targa Florio, San Marino, Friuli, Due Valli), stepping seven times on the podium and obtaining 38 special rounds (the 40%).  Peugeot has also won for the eighth time the Manufacturer title. This year the championship kicked off as usual with the Ciocco Rally, won by Alessandro Perico on his Peugeot 208 T16, equipped by Pirelli.  Andreucci won 7 of the 14 special rounds scheduled and fought back to the fifth place overall.  Pirelli yielded excellent results also in the tricolore Junior class with Giuseppe Testa and Emanuele Inglesi on the Peugeot 208 R2B.  Pirelli dominated from start to finish thanks to the Pirelli RX7B tyres, in a racing series that was made even more complicated than usual by the variable weather conditions.  The latest generation RKW7 rain tyres then proved to be the best choice on the second and last day, delivering excellent performance on the long and complicated Coreglie round. Again this year, the Italian Rally Championship includes eight events.  After the Ciocco Rally, the next round will be the Sanremo Rally in April, followed in May by two other events, the first on the Adriatic and the second in Sicily.  In July the competition will move to the San Marino Rally, followed at the end of August by the round in Friuli Venezia Giulia.  New this year is the Roma Capitale Rally, which will be held in September, while the final stage will take place in October in Verona. https://www.youtube.com/watch?v=wrpgRO0WL3w